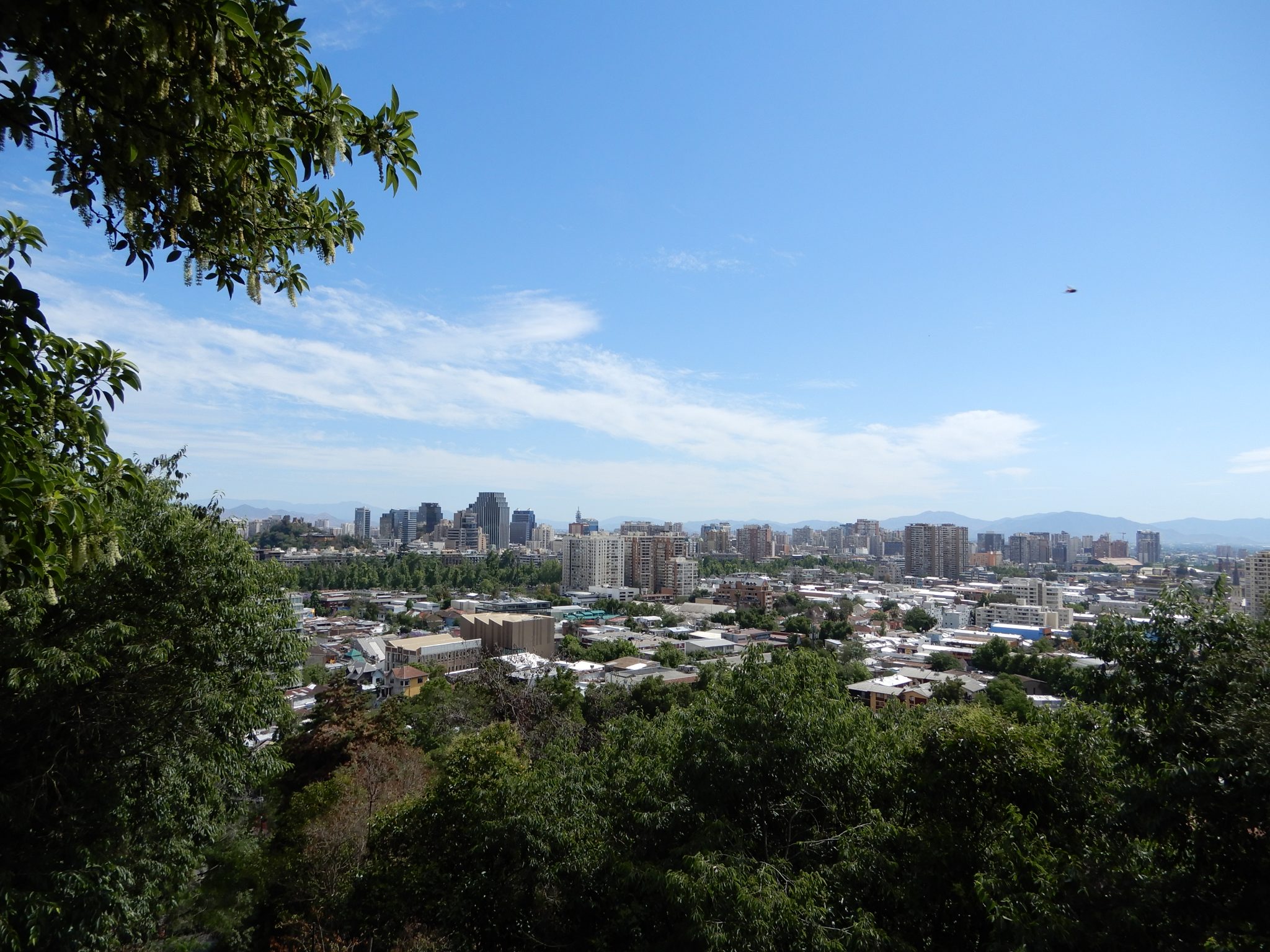 Santiago de Chile, the capital city, was our second big stop in Chile. Because it takes more than 24 hours to get there by bus from San Pedro, we decided to make several stops on the way. Antofagasta and La Serena were nice enough cities, but since there isn’t much happening in these cities I won’t go into detail about our stay there. About a week after leaving San Pedro, we finally arrived in Santiago!

A lot of Chileans had warned us that San Pedro was one of the most expensive cities in Chile. We definitely noticed the difference when we arrived in Santiago. In San Pedro we paid €44 for a room in a hostel with shared bathroom and without breakfast. In Santiago we managed to get a whole flat to ourselves for €28! That being said, Chile is definitely a lot more expensive than Bolivia where we paid on average €15 per night for a room with private bathroom and breakfast included. 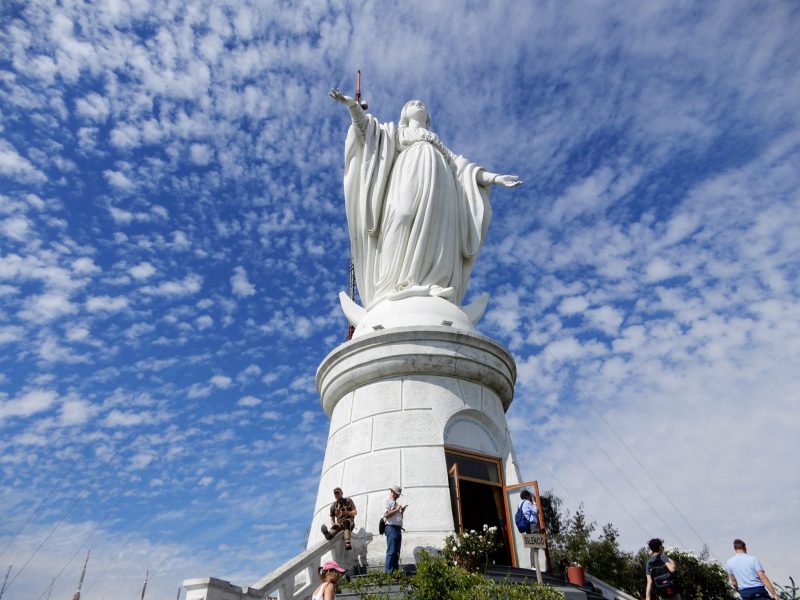 Our flat was located right next to the Cerro San Cristobal. There are tons of different cerros (hills) in Santiago, which are definitely worth visiting. Cerro San Cristobal was the first one we visited. We walked about 30 minutes to get to the foot of the hill, from where we could take a funicular up the hill. This funicular has been in use since 1925 and costs 4000 Chilean Pesos (€5.30) for a round trip. To get to the funicular, you just need to go to the building that looks like a castle, here you’ll find the ticket booth. On the way up, you can also stop at the national zoo.

The ride up took about 10 minutes, and offered beautiful views over Santiago. Once we got out, we got an almost 360 degree view over the capital city. We didn’t really realise how big Santiago us until we got to see it from up top of the Cerro San Cristobal. We also got to see some of the snow-capped summits of the Andes. It really was a beautiful view! On top of the hill there’s a big Madonna statue and also a church, which you can visit. We stayed there for about 30-45 minutes.

To get to the Cerro San Cristobal from our apartment, we had to walk through the Barrio Bellavista (Bellavista neighbourhood). Our flat was located next to a major street, which wasn’t particularly cosy. The Bellavista neighbourhood however, was very cosy. It reminded us a bit of a European city. Bellavista has tons of cosy restaurants and bars with outside seating, which wasn’t really a thing in other South American countries (according to our experience at least).

It was pretty clear this neighbourhood was a bit more upscale, which also meant that the prices went up quite a lot. Lunch menu’s and sandwiches in this area cost about 6000-7000 Chilean pesos (€8-9)… 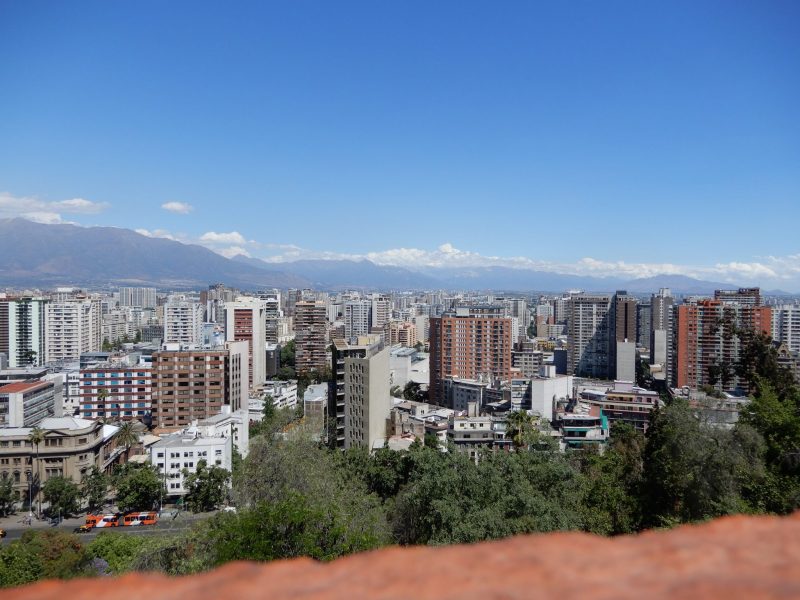 Another nice Cerro we visited was the Cerro Santa Lucia. This hill is located close to the Barrio Lastarria. Unlike the Cerro San Cristobal, you don’t have to pay to get into this park. The only thing you need to do is sign up and you’re granted entrance.

Santiago is quite a busy city, so it’s nice to get some peace and calm in these cerro’s. They are basically parks within the city, located on top of a hill. The Santa Lucia Hill, is full of cosy spots. There’s a staircase which leads all the way to the top of the hill, from where you get a nice view. The views weren’t as beautiful as the ones from the San Cristobal Hill, but Santa Lucia was still a very nice highlight. 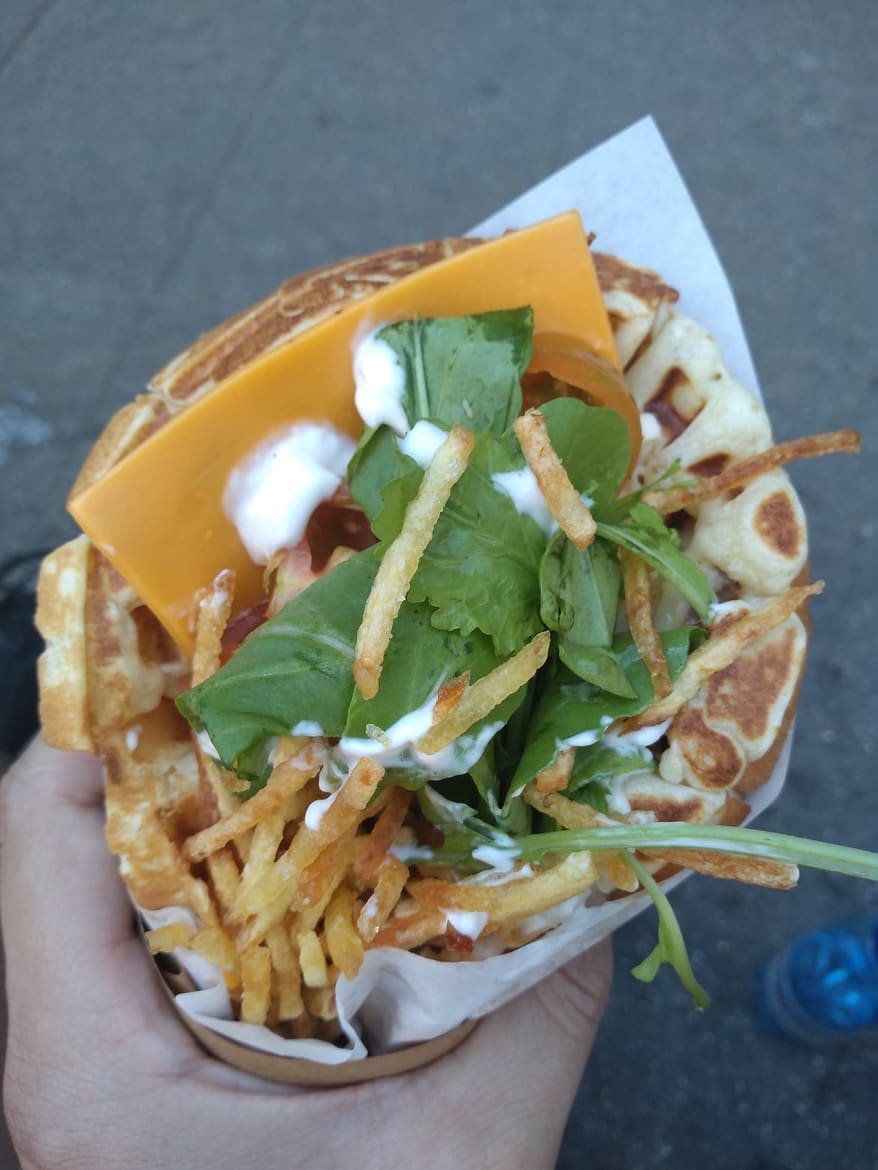 As I mentioned above, Cerro Santa Lucia is located next to the Lastarria neighbourhood. This was our favourite “barrio”. It’s full of people selling artisanal handcrafts such as jewelry, clothes, stickers, etc. You’ll also spot tons of street musicians trying to make some money on the side. All of this gives the Barrio Lastarria a really great vibe. During our week long stay in Santiago, we went back several times to this neighborhood, just because of the hippie-like atmosphere.

Here we also discovered the “Buffalo Waffles’ chain. As a Belgian, whenever I spot waffles, I’m always intrigued and want to try them out. Buffalo Waffles offers both sweet and savoury waffles. I chose one of the sweet ones, which was the “cheesecake” waffle. It came with cream cheese, oreo’s, strawberries, whipped cream and nutella sauce. And yes, it was as good as it sounds! Simen opted for a savoury waffle with pastrami, cheese, tomatoes and rucola leaves. We both loved our waffles and would advise anyone visiting Santiago, to go to Buffalo Waffles at least once! 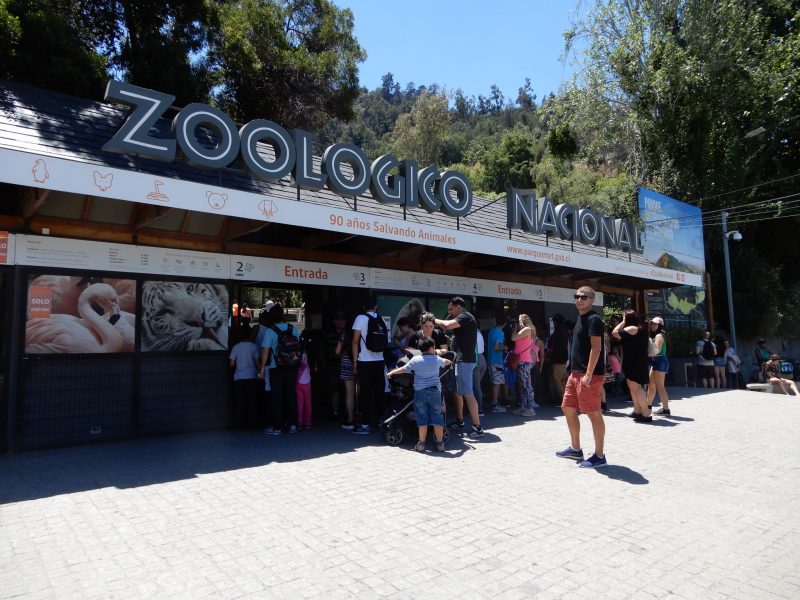 As I mentioned earlier, Santiago also has a zoo which is located on the San Cristobal Hill. We decided to visit the Zoo during one of our last days in the capital city. After another pricey lunch in the Barrio Bellavista, we made our way over to the zoo. The entrance to the zoo is next to the ticket booth for the funicular. You have to walk up for about 5-10 minutes before you reach the ticket booths. We paid 3000 Chilean pesos (€4) per person to get in. Because we went on a Sunday, there were tons of families also visiting the zoo.

This zoo is maintained a lot better than the one in Havana, where the animals are kept in horrible conditions… We saw elephants, giraffes, zebra’s, lions, tigers, penguins, llama’s, hippo’s, etc. Since the zoo is located on a hillside, it requires quite a lot of walking uphill. It didn’t seem too equipped for people in wheelchairs… We spent about 1.5 hours in the zoo, before heading back down again. 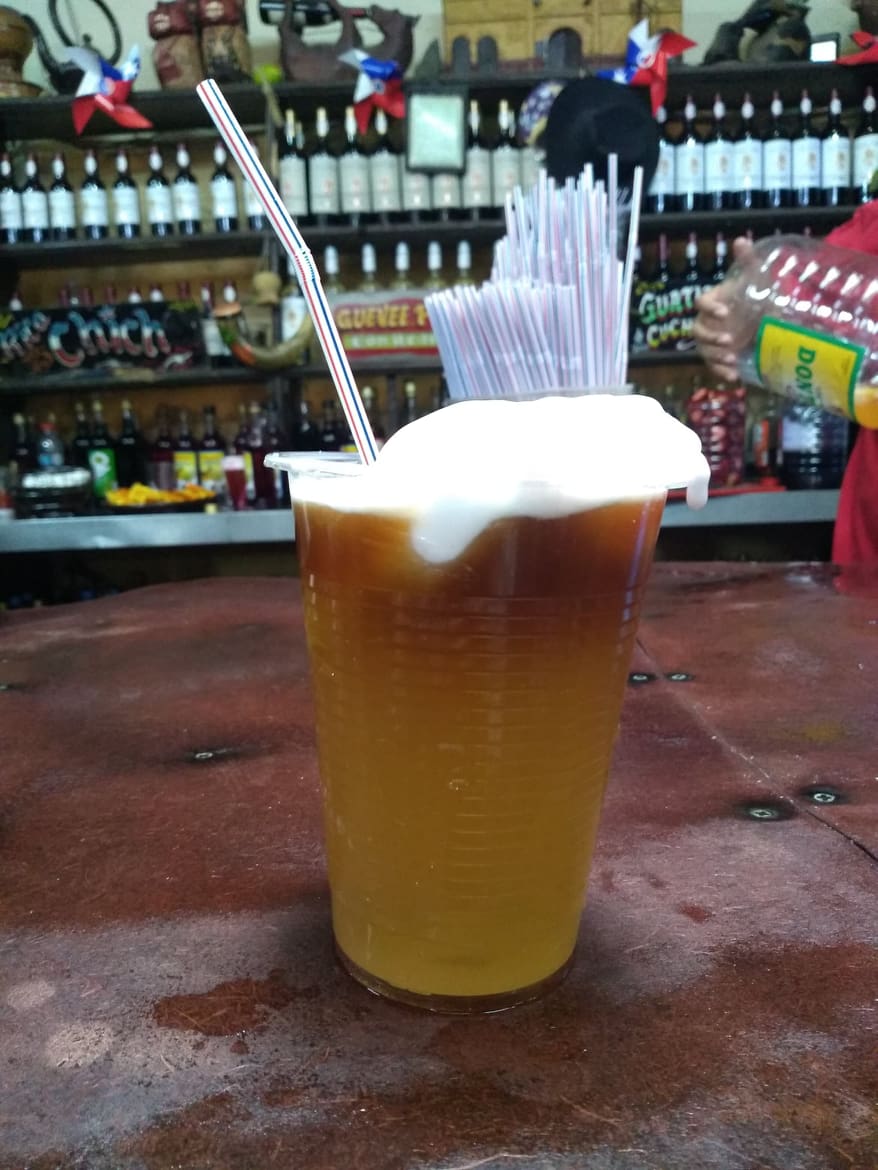 Simen had read about a local Chilean drink called the “terremoto”. Terremoto is the Spanish word for earthquake. It’s called this way because apparently after just 1 or 2 drinks, you can’t really stand on your feet anymore. That sounded promising… Simen’s interest was sparked, and we decided to go to one of the oldest bars in Santiago which apparently is known for making an amazing “terremoto”.

This bar is called “La Piojera” and is located a couple of blocks away from the Plaza de Armas. When we arrived, we realised this must be one of the favourite spots of locals. It was filled with Chileans all drinking a “terremoto” and having a really great time. I think we were the only locals in the bar. People were playing the guitar and accordeon, spectators were singing along. It was a very nice sight!

Simen ordered a “bitter” terremoto (there are 2 variants: bitter and sweet). The drink consists of Fernet Branca, wine, grenadine and pineapple ice cream. A pretty interesting combination. After only 1 drink, Simen got to experience the earthquake-like feeling himself…

After 6 days in Santiago, we decided to travel to Valparaiso. In my next blog I will write about our stay in this super laid-back city.