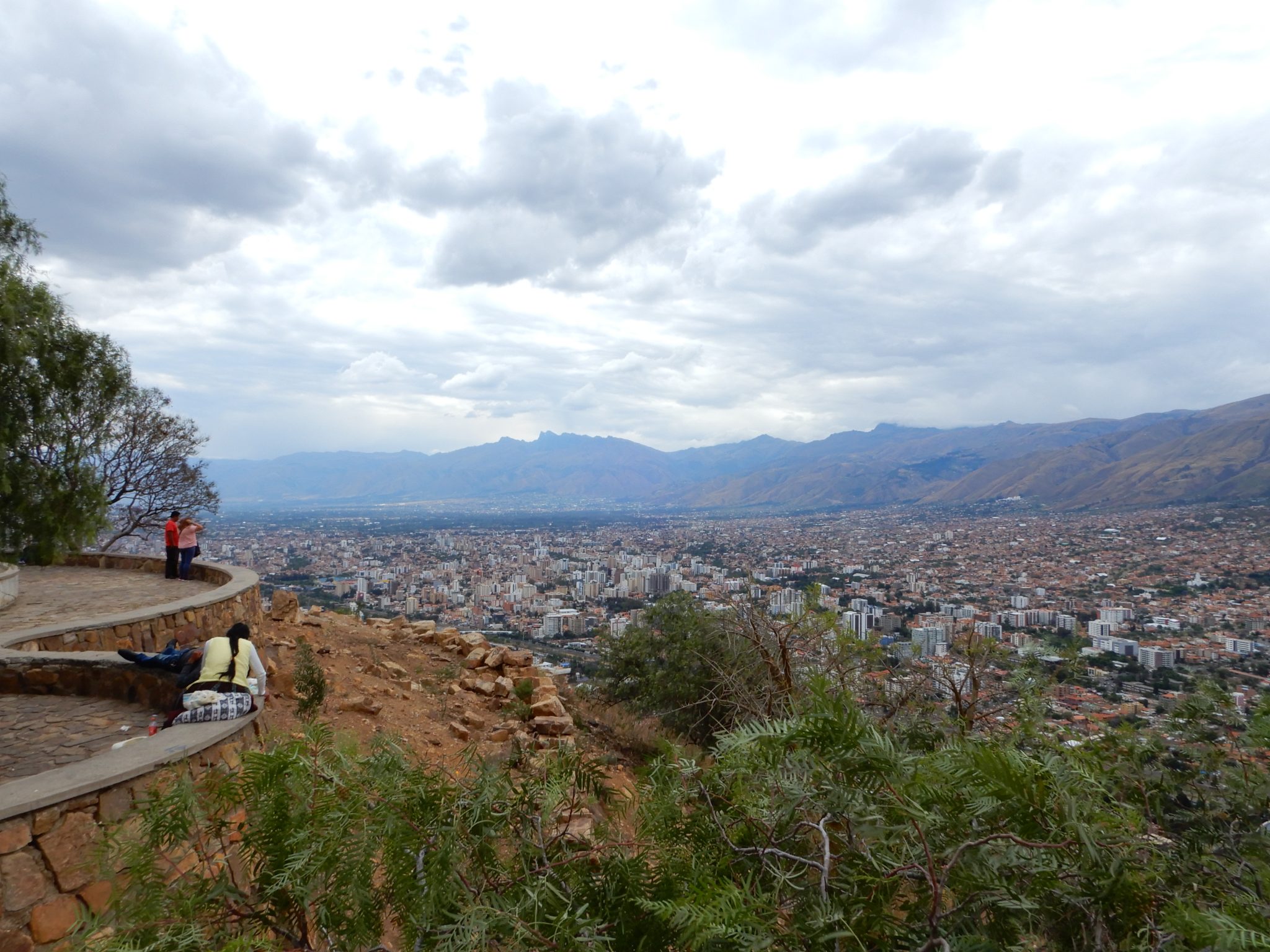 After our 9 day long stay in La Paz, we decided to take the bus to Cochabamba. Initially we really wanted to do the Toro Toro tour (where you get to see dinosaur footprints!), but after doing some research we realised all tours cost more than €180! Since we wanted to save the money, we decided to just stay in Cochabamba and explore the city and its surroundings.

La Cancha is a massive market in the centre of Cochabamba. We had read online that you can find whatever you’re looking for at the Cancha market, and boy they were not lying! They not only sold tons of food (fruit, vegetables, etc.) and typical Bolivian handcrafts, but also suits and wedding dresses! If you’re looking for a good gift for a kid’s birthday party, La Cancha is the place to be! Want to get some clothes altered or are you looking to buy a birthday/wedding cake? La Cancha has everything you’re looking for!

We wandered through the countless aisles of the market, amazed at how many things you could buy here. You could completely renew your wardrobe if you wanted. Surprisingly, we didn’t really buy anything except for some underwear since our hotel in La Paz lost almost all of it… Simen managed to resist the temptation of buying some more hippie pants (his new addiction this trip!). Visiting La Cancha is definitely a nice way to kill some time in Cochabamba.

Did you know that Cochabamba has a Christ statue bigger than the one in Rio de Janeiro? Neither did I! During our 2nd day in Cochabamba, we decided to visit this statue which is 40 metres tall (Cristo Redentor is 38 m). We walked all the way through the city for more than an hour (our Airbnb wasn’t located as close as they advertised…) before reaching the teleférico which would take us up to the statue. The teleferico was very cheap and only cost 13 bolivianos for a return trip (which is not even €2).

Once you arrive with the teleférico, you still have to climb up to the statue for about 5 minutes. The view at the top is very nice and the Cristo is actually quite impressive! We got to see all of Cochabamba and its surrounding mountains, which was very nice. 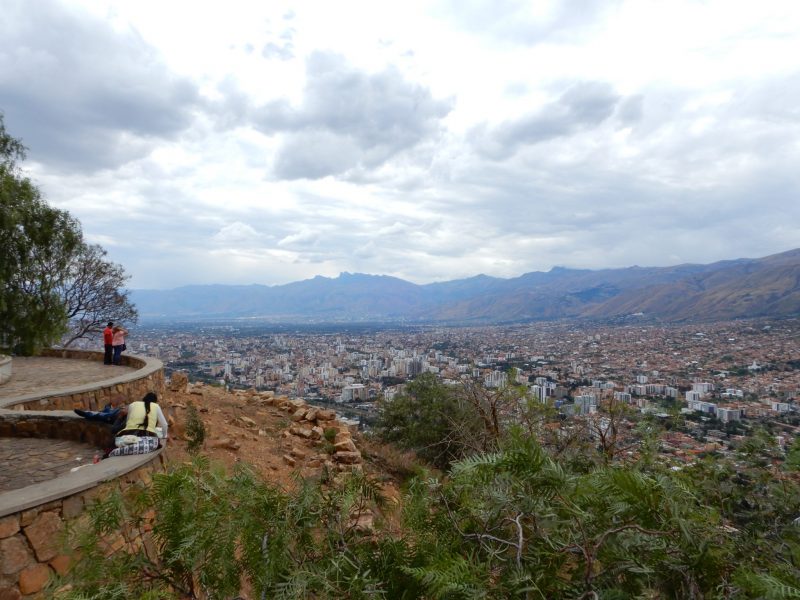 The last day in Cochabamba we spent bar hopping. Our bus to Sucre only left at 21.30 and we had basically run out of things to do. Simen also had some freelance tasks to work on, so we stayed out all day going from bar to bar/restaurant. We had left our big bags in the Airbnb since we both didn’t feel like carrying 13+ kg around all day. Our Airbnb host said it was no problem to leave our stuff there for the day.

At around 20.15 we decided to leave the restaurant to make sure we’d get to the bus terminal in time. While we were in the taxi back to the Airbnb I suddenly got a weird feeling. “What if no one’s home to open the door for us and we can’t reach our luggage?” I said to Simen. Unfortunately, my hunch was right. When the taxi approached the house, all the lights were off. “It looks awfully dark in there”, the taxi driver said. My heart sank. It was pretty clear no one was home.

Simen jumped out of the car and rang the bell. No response… We had handed over the keys to the house this morning, so we had no way to get in.

“Is your luggage inside?” The taxi driver asked. I nodded.

“Uh oh. How much longer until the bus leaves?”

“About 1 hour…”, which wasn’t that much considering the drive to the bus terminal was going to take at least 20 minutes.

We both tried to call them with our Bolivian phone numbers (which were completely useless by the way, it worked for literally 1 day, don’t buy a VIVA sim card!). Even though we should have about 100 free minutes on the card, both cards were out of credit… The taxi driver offered to top up his card to call for us.

“The numbers are not working?” He said, after trying to reach the 2 different numbers. In the meantime the clock was ticking and we were getting closer to 9 PM.

Hectic drive to the bus terminal

We started considering jumping over the wall, when finally at around 9 PM the taxi driver managed to reach the owner of the Airbnb. She promised us someone was going to get there in 10 minutes to let us in. At 21.10 the daughter finally arrived and handed over the keys to Simen who sprinted inside and got our backpacks. We had 20 minutes left to get to the terminal. The taxi driver had already warned us that traffic is very hectic at this time and we had both already made peace with the fact that we were going to miss this bus…

We were almost at the bus terminal when we got stuck in a massive traffic jam. It was now 21.25… There was no way we’d make the bus. We started considering our options.

At exactly 21.28 the taxi driver parked the car and told us to run towards the bus terminal. We checked in, got our tickets, and handed over our luggage to the bus company. With 1 minute to spare we wanted to walk through the gates to get to the bus. But of course, we had forgotten you have to pay a terminal fee before you’re allowed to walk through the gates. We quickly ran back to the entrance to buy our fees and sprinted towards the gates, only to see that our bus was 30 minutes late! We had been stressing like crazy for no reason…

Our bad luck still wasn’t over

The next morning we arrived in Sucre at around 5.30, earlier than expected. However, that shouldn’t be a problem because our hostel had 24h reception and check in at 7 AM, so we weren’t worried at all. We got dropped off at the hostel and rang the bell (which didn’t work), no answer. We knocked on the door, rattled the gate. Still no answer.

“Maybe we should come back at 7 when we can actually check in?” I suggested, and we walked back to the main square where we waited for 90 minutes. At 7 AM we went back to the hostel to check in. Once again, we knocked on the door, rattled the gate. No answer. It looked completely dead inside. We were getting very annoyed. Why did it say there was 24h reception and check in at 7 when there was clearly no one here?

After about 15 minutes of knocking and shouting, someone finally came to open the door. She wasn’t even working for the hostel, she was just a guest who we had woken up…

The girl was very friendly and let us in to wait in the lobby. In the meantime she tried to reach the owner of the hostel. When we walked in it was obvious this hostel (MANDRAGORA HOSTEL IN SUCRE) clearly didn’t have 24h reception since the reception desk in the lobby was unmanned. The only people present in the hostel were guests just like us.

“You don’t have a reservation?” the girl asked.

“Yes we do…” Simen said, showing her the confirmation of our reservation on his phone. The girl disappeared to call the owner again. After trying for about 30 minutes, the owner finally picked up and said the reservation hadn’t gone through on their end. Great.

Our room wasn’t available yet and still had to be cleaned: At first they generously offered us to sleep on a mattress in the lobby like a bunch of hobos. After we obviously declined that they let us stay in another spare room for the time being. We stayed there for several hours until we decided to go out for breakfast. In the meantime we had been waiting for the owner to arrive, which he/she never did. 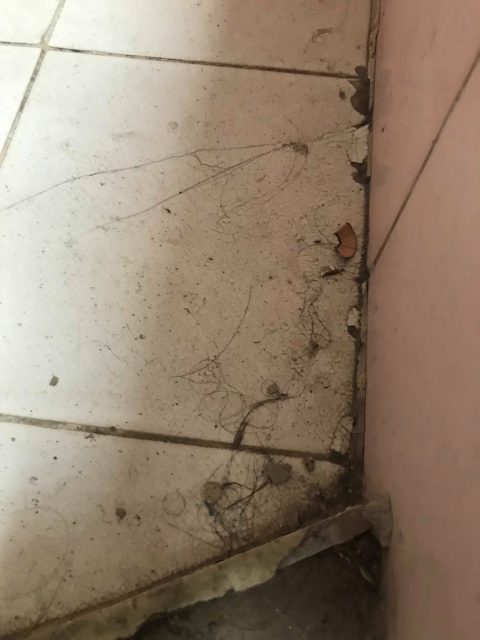 We finally got our room… which was disgusting

After lunch, our room was finally available. The girls had cleaned it for us (does this hostel not have a cleaner?). We dumped our stuff and inspected the room. There was a very funky smell and the bathroom was not cleaned at all. There were still hairs from previous guests on top of the toilet and in the shower… Even when we texted them to let them know the bathroom was very dirty, it never got cleaned. The towels we got had some very peculiar brown spots on them and my duvet still had an old band-aid attached to it. And to top it all off, there was a camera installed in our bedroom!!! This really gave me the creeps. 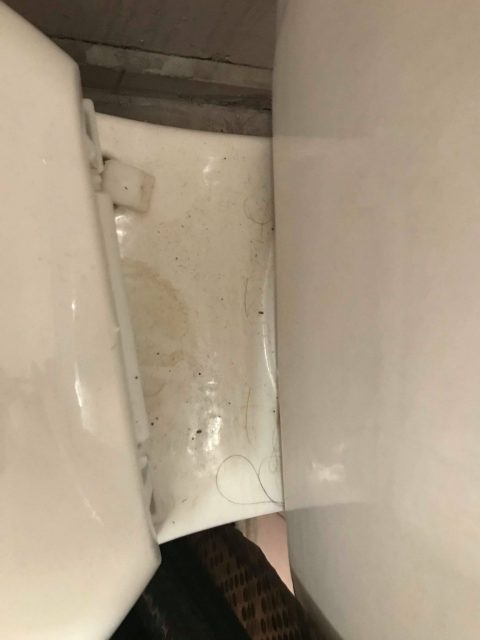 It was absolutely disgusting. Honestly, if you’re in Sucre, don’t ever go to Mandragora Hostel. In the meantime, we still hadn’t met the owner who was going talk to us and explain what had gone wrong. During our 3 day stay we never got to see anyone, until the last day when we had to pay. Of course they could make an effort to show up to collect money… The whole place was a disgrace.

After 3 days we moved to another hostel, I couldn’t bare the thought of having to stay in that disgusting place any longer.

I didn’t expect this post to be this long, so I’ll write more about Sucre in my next blog.