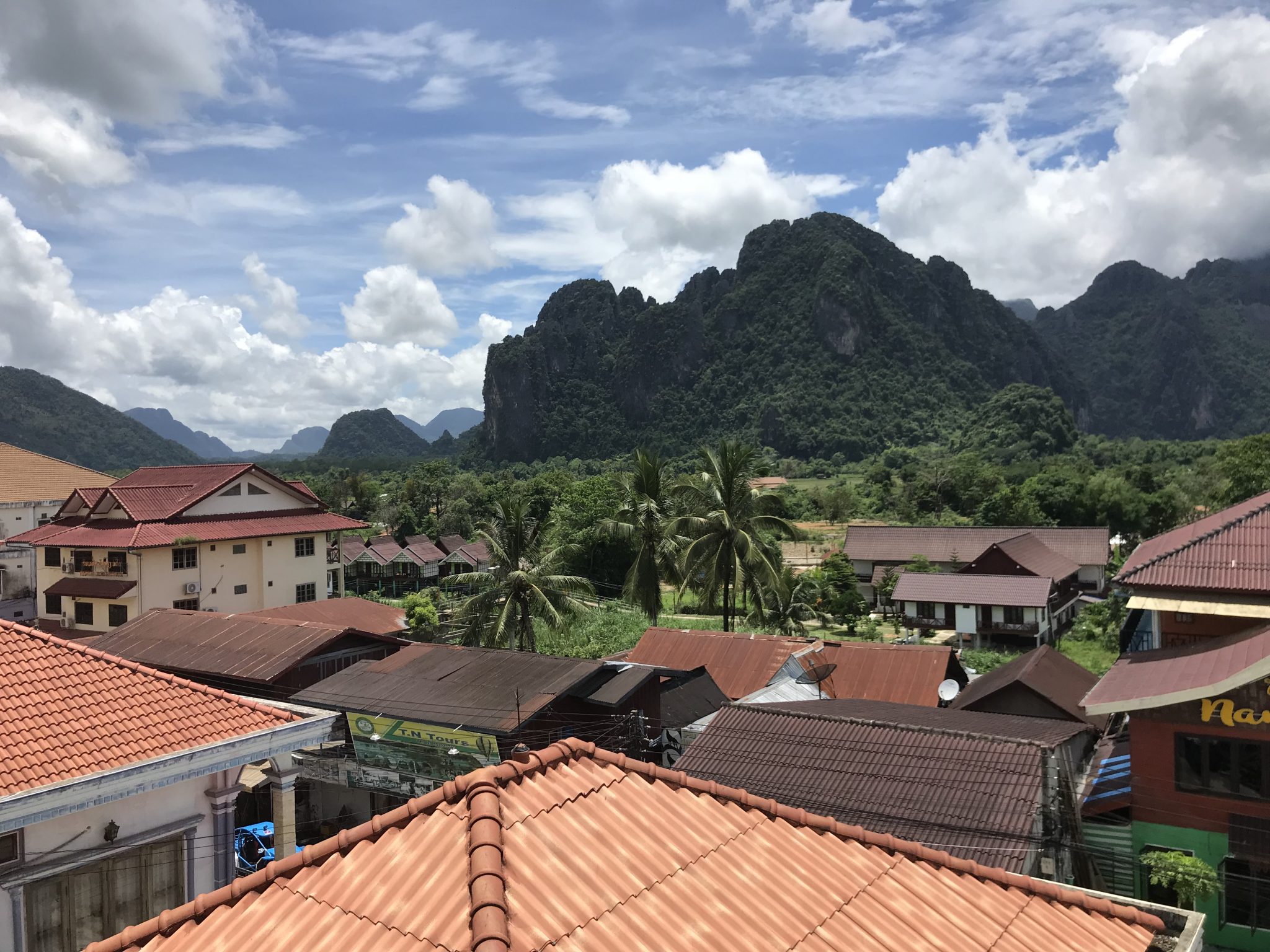 After a short stay in Cambodia, we decided to travel onwards to Laos. It wasn’t initially part of our itinerary, but since we had extra time we decided to add another country to the list. We arrived in Luang Prabang, a small city in the north of Laos, home to about 55.000 inhabitants.

The city has a lot of French influences, which becomes clear when you roam its streets. It doesn’t feel like you’re walking around in Asia at all. The houses look very European and you can find lots of cosy bars, restaurants and bakeries. One of the main things we noticed once we arrived, was how quiet Laos is compared to Cambodia and Vietnam. We didn’t have to risk our lives every time we had to cross the street. It was a nice change!

Today we visited the Kuang Si Waterfalls. These gorgeous turquoise waterfalls are located about 30 km away from Luang Prabang and are definitely a must see in Laos ?! #laos #instaphotography #wanderlust #asia #luangprabang #loveplanetearth #rtwtrip #travellove #travelblogger

We spent 5 nights in Luang Prabang, which, admittedly, was a bit long. The city’s main highlight is the Kuang Si Waterfalls. We took a shared van for €5 per person. The van picked us, and many others, up from our hotel before making its way to the waterfall. Be aware that, even though the waterfalls are only about 30 km away, it will take a whole hour to drive there. 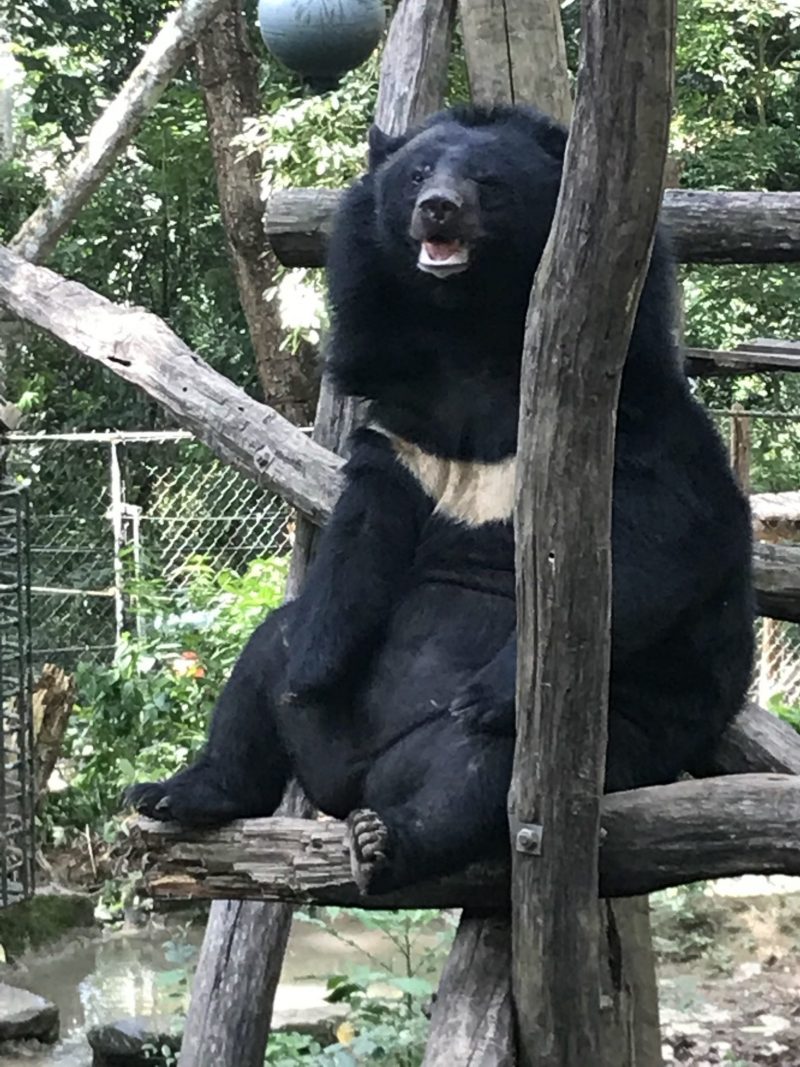 Once we arrived, we were told we’d get 2.5 hours of free time before heading back to Luang Prabang. Right next to the waterfalls, is a Bear Rescue Centre. The bears have a lot of space to roam around and have access to water and lots of shade. It was interesting to see the animals, especially because the bears looked very different from the ones we know! 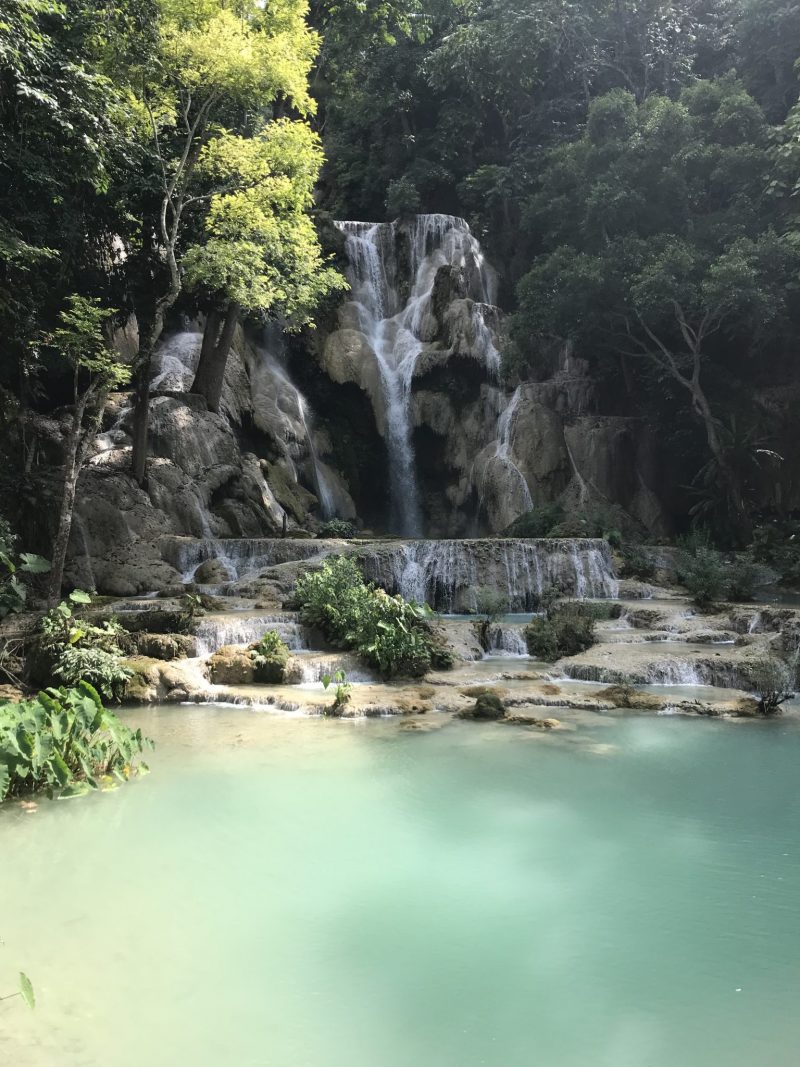 After admiring the bears, we walked towards the waterfalls. Here you can swim in the natural pools, or you can hike up the hill to the source of the falls. We opted for the latter, despite the heat and the humidity. The walk up takes about 20 minutes. Be aware that you won’t get much of a view from up there. You can, however, take a small boat to the source of the waterfalls. There are also a couple of pools up there where you can swim.

It was clear to us that 2.5 hours at the Kuang Si Falls is a bit much, especially if you’re not planning on swimming. It’s a very beautiful place but there isn’t that much to do there. 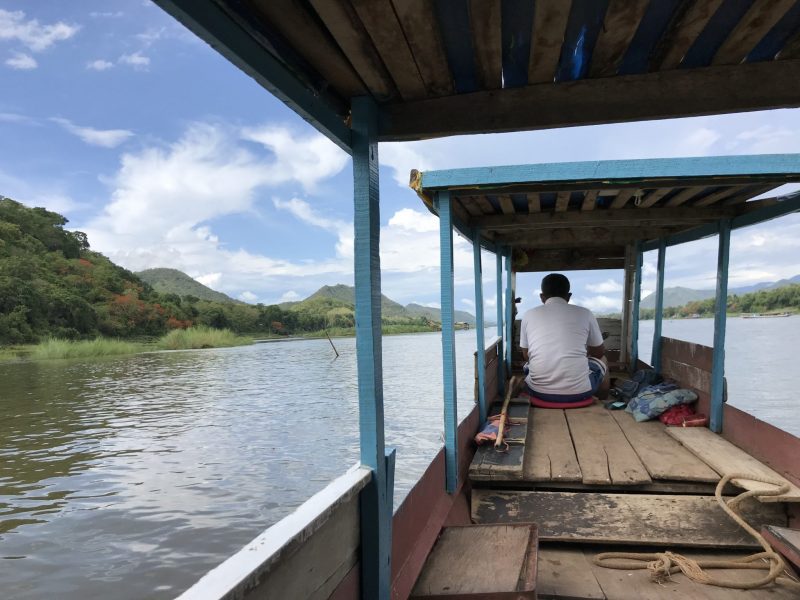 Another highlight of Luang Prabang is the Mekong River Cruise. Most people opt for dinner on the river to watch the sunset, but because we came at the wrong time of the year, there wasn’t really a sunset to watch. So, we decided to go for a boat tour during the day. Luang Prabang’s surroundings are gorgeous, and a boat trip really makes that clear. We paid €6 each to go on a one hour cruise up and down the river. 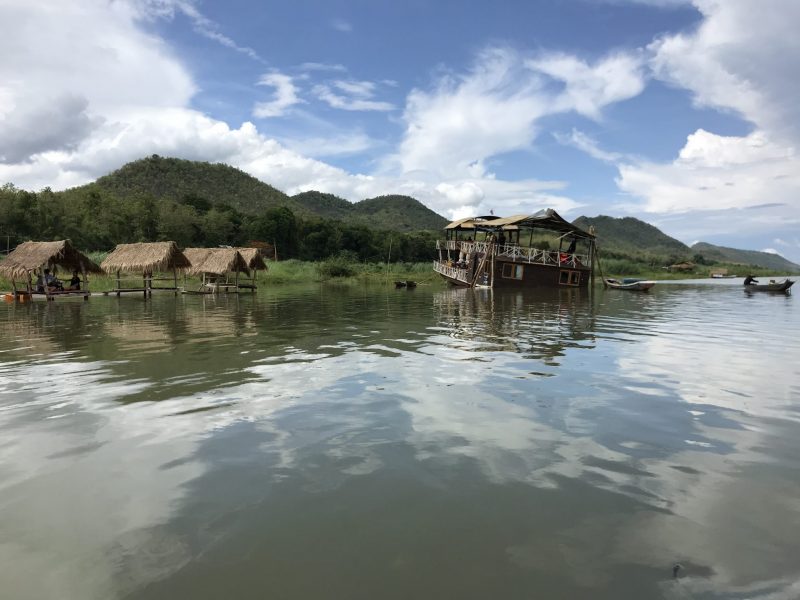 Once again, we were in awe with how quiet Luang Prabang is. It was just the two of us and the captain, cruising down the river. We spotted several Lao children swimming in the river while their mothers did the laundry. It really felt like a trip into the past.

There are definitely more things to do in Luang Prabang than just the Kuang Si Waterfalls and a Mekong River cruise, but because of the excruciating heat, we didn’t really do much else.

Our next destination in Laos was Vang Vieng. This town is about 180 km away from Luang Prabang and took about 3 hours by minivan. 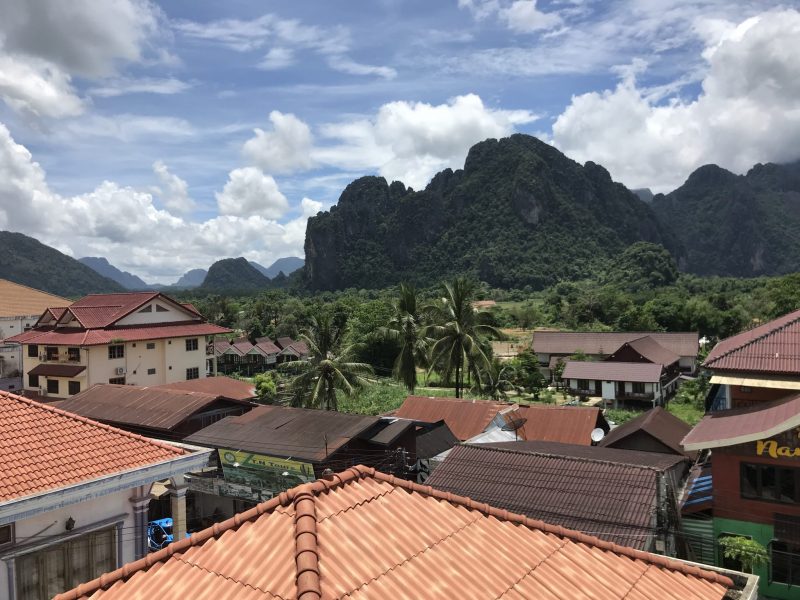 Asia in May/June is maybe not the best choice. Chances are it will rain every day. It will also be extremely humid (90%) and temperatures skyrocket. It may “only” be 35 degrees, but it actually feels more like 45! This meant that whenever we went outside to do something, we immediately had to take shelter. During our time in Vang Vieng, we didn’t really do that much.

This town is known for “tubing” down the river and through caves. It’s the adventure capital of Laos. You come here to hike, zipline, raft, kayak, etc. Because we read that tubing during the rainy season isn’t really advisable, this also wasn’t an option. We spent some time in the pool of the hotel, and most of it in our hotel room, working and relaxing.

We managed to do at least one activity: the Tham Jang cave. This cave is about 30 minutes away from the city centre (on foot). We walked from our hotel and back, and believe me when I say, this was more than enough activity in this heat and humidity! 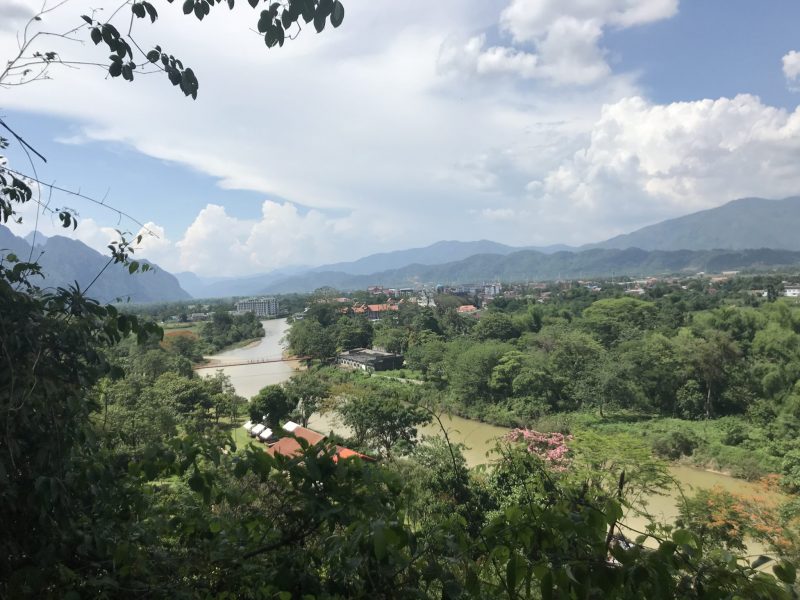 The cave itself wasn’t super spectacular, but it did have some great views over Vang Vieng. After admiring the views, we made a quick stop at the “blue lagoon” close by (which wasn’t really anything more than a small river/waterfall). Afterwards, we immediately had to go back to our hotel room because we were in desperate need of the AC. 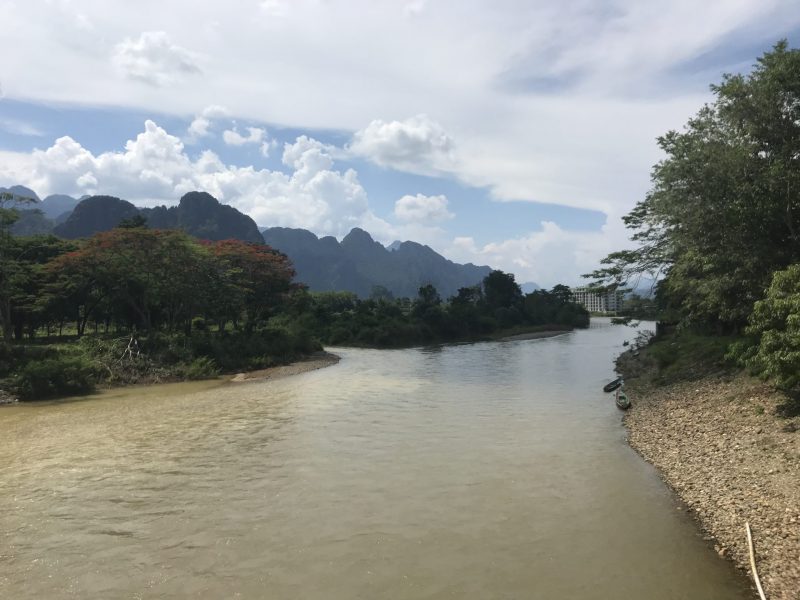 Our last stop in Laos was the capital city of Vientiane. It took us about 5 hours to get there from Vang Vieng, mainly because our bus driver refused to leave before he filled up all the seats on the bus. This took quite some time because people kept leaving after they realised that the “VIP bus” they had booked, was more like a bus they used back in the 60s… After waiting for 1.5 hours, he finally managed to fill all the seats and we were on our way to Vientiane.

Vientiane isn’t really known as a cosy or nice city. We only stayed here one day, and have to agree with that statement. You can tell the city isn’t really equipped for tourists. We were happy we had only scheduled one day here.

Next Post → How to plan your visit to Chichen Itza