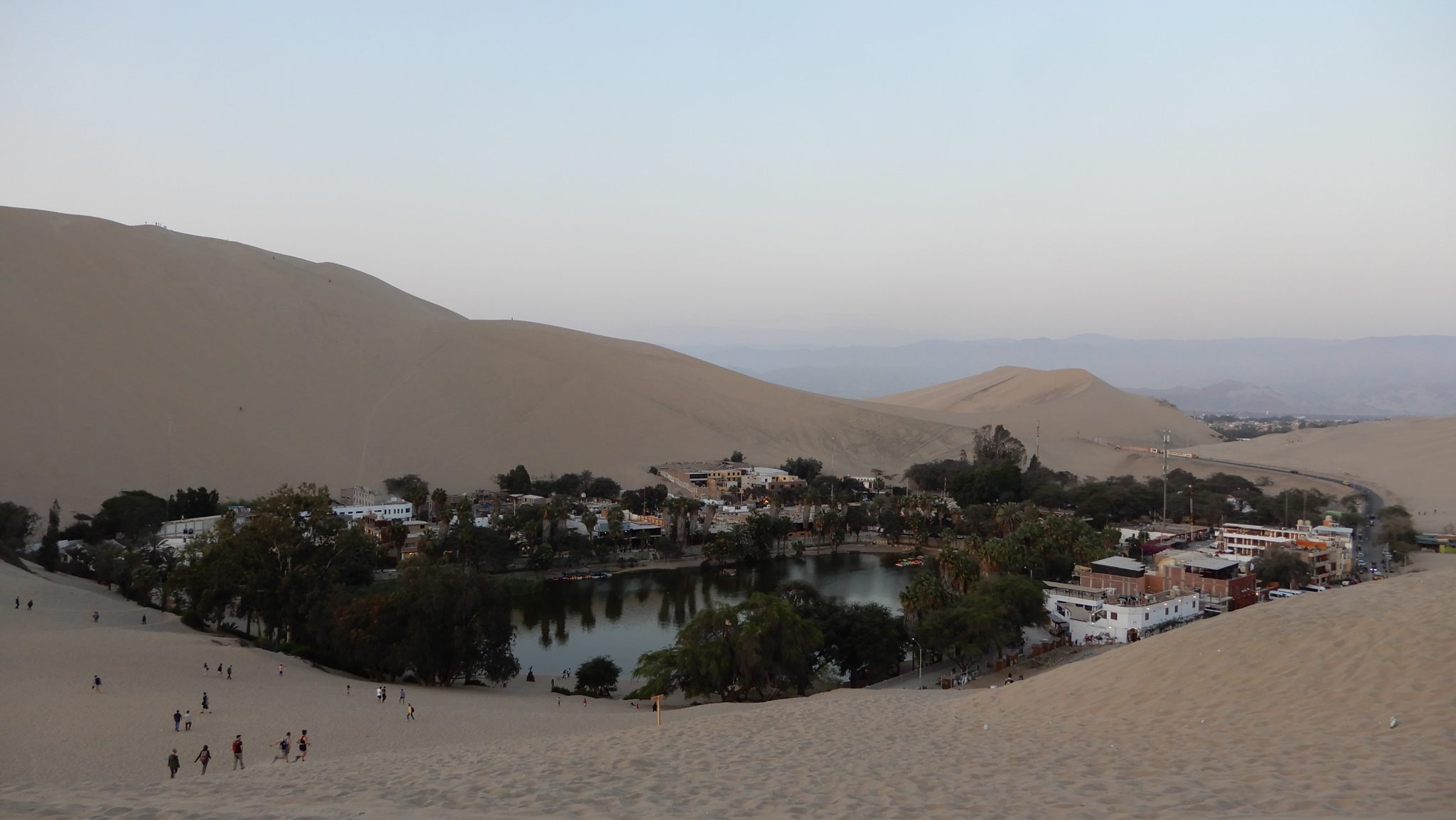 After our visit to Paracas and the Ballestas Islands, we hopped on the bus to Huacachina. Huacachina is a beautiful oasis in the middle of the Peruvian desert. This place is known for its sandboarding and its tours through the desert. We booked a tour through Peru Hop for only €12.50. The tour lasted about 2 hours and took us through most of the desert surrounding Huacachina.

Cruising the desert in dune buggies

About 1 hour after arriving in Huacachina, we were already on our way to the dune buggies. We were quite a big group of Peru Hop people who were all divided in small dune buggies (8 people per buggy). On the way to the buggies, I spotted some people carrying ski’s and snowboards. I didn’t realise you could actually rent equipment to ski or sandboard down the dunes. It looked really cool, but since I didn’t know that was a possibility, we just stuck to the normal tour.

We were paired up with 3 other couples and hopped on the dune buggies. After making sure our safety belts were secured tightly, we were on our way. I was slightly nervous while Simen was smiling from ear to ear from excitement. We had only just left the meeting point when our driver immediately drove straight down a very steep dune. It felt like being in a rollercoaser! He cruised through the whole desert, driving straight down various very, very steep dunes at quite a high speed. It was so much fun! Everyone was constantly screaming.

From snow to sand

After about an hour cruising through the Peruvian desert, the driver parked the dune buggy on top of a high hill and took out the sandboards. He made us apply wax to make sure we were going down the dunes even faster. Simen was the guinea pig of the group and slid down on his belly down the hill. The other couples and me stared down the hill, not entirely convinced. We hadn’t thought the first hill was going to be this steep! After contemplating for a bit, I handed my sandboard over to the driver, lied down my belly and slid down the hill myself. It was really cool!

We were both hooked from the start. While everyone else took their time deciding if they wanted to go down the hill, we immediately tried out all the other hills. After the first couple of hills the driver took us to some other, even steeper hills so we could sandboard a bit more. After the sandboarding the driver drove us to a beautiful spot where we could watch the sunset. It was really nice to see the sun go down on top of the dunes. After watching the sunset, the tour was over and everyone returned to the hotels with smiles on their faces.

A must in Peru

I would definitely recommend going to Huacachina to go for a ride in a dune buggy (you can’t drive them yourself) and to sandboard down the hills. A couple of days before going to Huacachina I had read in the Belgian news that a Belgian girl had died in Huacachina after trying out sandboarding, which of course made me a bit nervous. After doing it ourselves, we couldn’t really understand why the agency had allowed her to slide down the hills that close to the hotels! We were brought to the middle of the desert, with no hotels around. It was completely safe. It was very irresponsible of that agency to allow her to sandboard in the vicinity of Huacachina! We’d recommend going with a reliable agency, even if you have to pay a bit more. We didn’t feel unsafe at all during our tour of the desert.

Seeing the Nazca Lines from the sky

The day after our desert adventure, we got on the bus towards Nazca. This is not a complimentary stop with Peru Hop, but after a lot of contemplating, I had decided I wanted to do the Nazca Flight. So, we hopped off at Nazca while the entire bus continued their journey to Arequipa. The Nazca Lines are lines which are about 2000 years old. No one knows how they got there or what purpose they have. Since they can only be viewed from the air, I booked a ticket with AeroNasca for about €72 (+ €8 airport tax, to be paid at the airport).

Peru Hop made a stop at the view tower, from where you can see 3 of the figures, but to be honest, you could barely see anything. So, I was happy I had the flight scheduled the next day. Simen didn’t feel like it was worth €80 so he decided to stay at the hostel. The next morning I got picked up at 7.50 for my flight. On the way there I met a nice German couple who was also travelling the world for a year and kept me company during the flight.

I had read that quite a lot of accidents had happened in the past and that several planes have crashed before. I booked my ticket on findlocaltrips, through Peru Hop, which only works with reliable companies. That being said, I was still quite nervous when I arrived at the airport. I checked in, paid the airport tax and went through security before being brought to the plane. I had never been in a plane that small before. There was only room for 6 passengers + the pilot and copilot.

Before boarding, the pilot asked if we had been on a small plane like this before. When I said no, he told me there were puke bags in the seat in front of me in case I got nauseous, which apparently happens a lot in these small planes. That sounded promising… The minute we took off, I could tell why they provided plastic bags. The plane was very shaky and moved a lot. Luckily, I hadn’t eaten anything before the flight. I think if I had eaten, I might have thrown up! Luckily, my stomach felt normal, even when the plane turned from left to right to make sure we could spot all the figures.

The plane takes plenty of time to make sure every passenger is able to spot the figures. The whole flight took about 35 minutes, and I not only got to see the Nazca Lines but also the beautiful surroundings. I definitely got to see more than the girl in front of me, who spent quite some time staring down her plastic bag… After seeing the Lines we flew towards the aqueducts in Nazca, and then back to the airport.

After our stop in Nazca we travelled to Arequipa, where we signed up for a 2 day trek through the Colca Canyon. Stay tuned for my next blog about this trek!