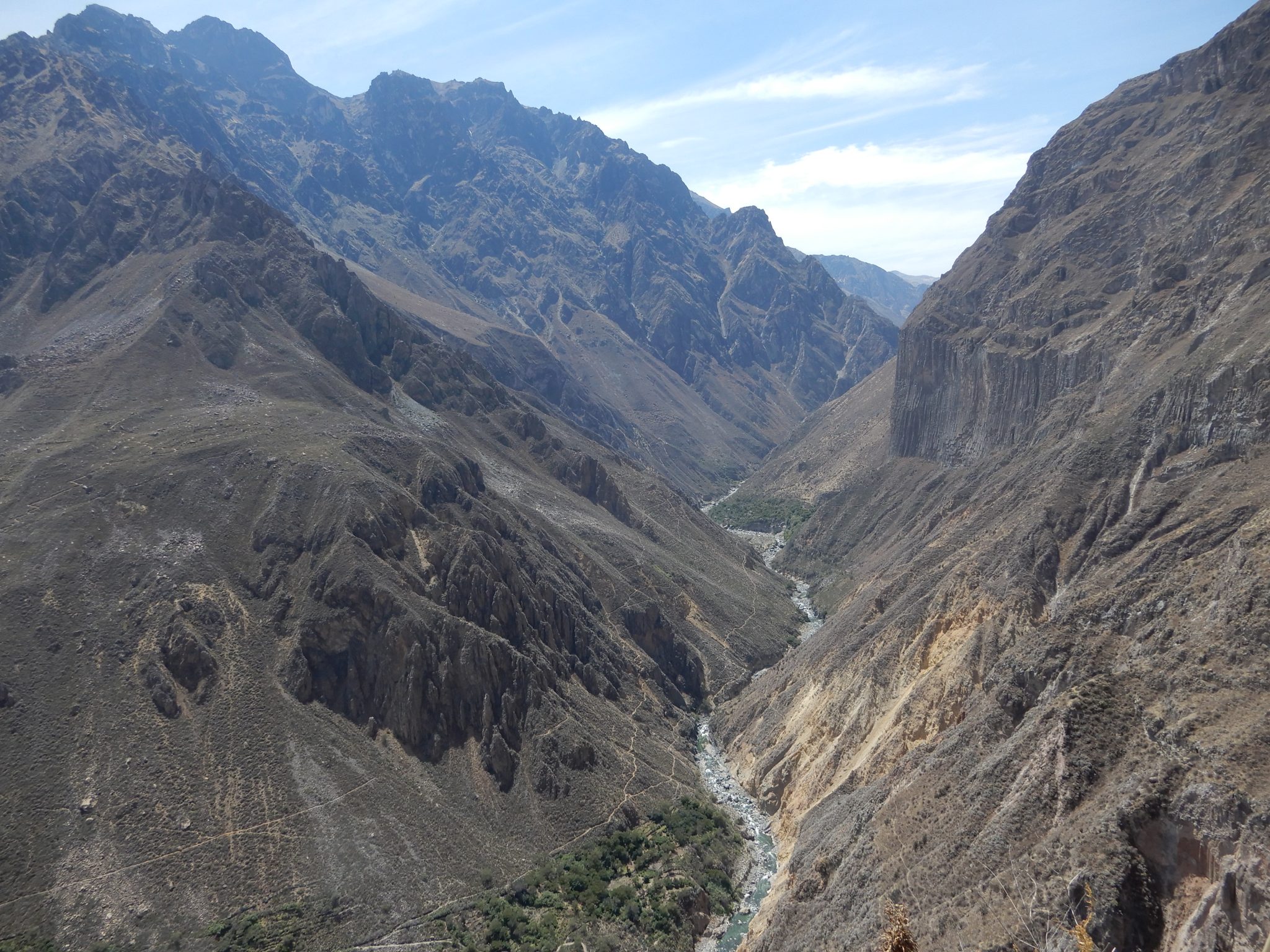 After doing the Nazca flight, we travelled towards Arequipa. Unfortunately, we had to take a night bus to get there and Simen managed to get the only seat in the bus that didn’t recline… To make matters worse, there was a very tall Dutch guy in front of him who did recline his seat. Simen was basically stuck in an upright position for 11 hours!

We only spent 1 day exploring the city of Arequipa. This is the 2nd biggest city of Peru, and attracts a lot of tourists. While we were travelling through Ecuador, quite a lot of people had told us how beautiful Arequipa is. So, needless to say we had high expectations! We mainly explored the city centre of Arequipa, which is very pretty. Especially the main square is very beautiful. The church is impressive and the whole square is surrounded by arcades full of restaurants and shops. We took it quite slow that day, considering we hadn’t slept much on the bus and we had to get up at 2 AM the next day to start our Colca Canyon trek (40 dollars per person). Arequipa isn’t that big, so it felt like 1 day was enough to get an idea of what the city looked like.

Since Colca Canyon is located about 5 hours away from Arequipa, we got picked up by our guide at 3 AM. When we got in the van, we realised we were part of quite a big group (13 people) who had all signed up for this trek. After a 3 hour drive, we stopped for breakfast, where we got to know our “team members” a bit more. It was very obvious we were a very international group. There were people from Canada, the US, Peru, Austria, Switzerland, the UK and the Netherlands.

After breakfast, we drove through the main view point of the Colca Canyon, Cruz del Condor. Colca Canyon is not only the 2nd deepest canyon in the world (deeper than the Grand Canyon!), it’s also a good spot to see Condors. We got about 40 minutes at the viewpoint, to see if we could spot any condors. We only managed to spot 2, but it was really cool to see these majestic birds from this close!

Afterwards we drove another 50 minutes to get to the starting point of our trek. The first day of the trek is mainly downhill, until we reached the bottom of the canyon. This took about 3 hours, and we realised immediately we were part of a very fit group since people were almost flying down the trail! After lunch we still had to walk for another 3 hours to reach the oasis, where we were going to spend the night. The trail was described by the guide as “Peruvian flat” (a little but uphill, a little bit downhill), but to be fair, it was mainly uphill!

We walked parallel with the river, and got to see some really nice views of the canyon. On the way to the oasis the guide told us all about the condors, the canyon and the people who live in these desolate part of the world. After a while we let the very fit people hike on their own while we took it a bit slower. We arrived at the oasis at about 4 PM.

We were lucky since all the couples got our own private room while everyone else had to share a dorm. The accommodation was very basic (there was literally only a bed in the room, nothing else). However, after talking to the other trekkers, we realised we actually had one of the better rooms. Why? Because we had light in our room! The other ones had no electricity, or were sleeping on the grass. We clearly couldn’t complain!

That night we all had dinner together, which was very nice since we got a chance to really get to know everyone else a bit better. We were very lucky to have ended up in a very nice group! Everyone went to bed early because the next day we had to get up at 4.15 to start our hike at 4.45. The second day of hiking was just straight uphill. It was “only” 5 km (compared to the 17 km we did on day 1), but we had to hike up 1100 metres. The trail zigzagged across the mountain, as we started our ascent in the darkness.

Since we had noticed that most people in the group were fitter than us, we almost immediately took it at our own pace. I didn’t want to run the risk of burning myself too early, or risking Simen to suffer from altitude sickness again. It took us almost 3 hours to get all the way to the top, which I think is not too bad. When we arrived, however, we heard that the majority of the group had done the hike in 1.50 – 2 hours! We were very exhausted by the time we had arrived at the top, and the 30 min walk to the breakfast place felt a lot heavier than it normally would’ve.

Relaxing in the hot springs

After breakfast we got picked up by the van which brought us to some hot springs where we could relax our muscles! For 15 soles (€4) we could use all 9 pools which had temperatures in between 34 to 44 degrees! It was a great way to relax and give our muscles some rest. We stayed here for about an hour until it was time to go for lunch. We paid €8 for an all you can eat buffet, which we welcomed with open arms.

After lunch it was time to head back to Arequipa. During the 3 hour drive we stopped at a 5000 metre high viewpoint where we could see the surrounding volcanoes before stopping at an alpaca and llama farm. We arrived in Arequipa at around 5 PM, feeling completely exhausted but also very satisfied. This 2 day Colca Canyon trek felt like the perfect preparation for the Salkantay Trek to Machu Picchu!

Our next stop is Cusco, to see the amazing Machu Picchu!

Next Post → Giveaway: win a year-long subscription to GPSmyCity!