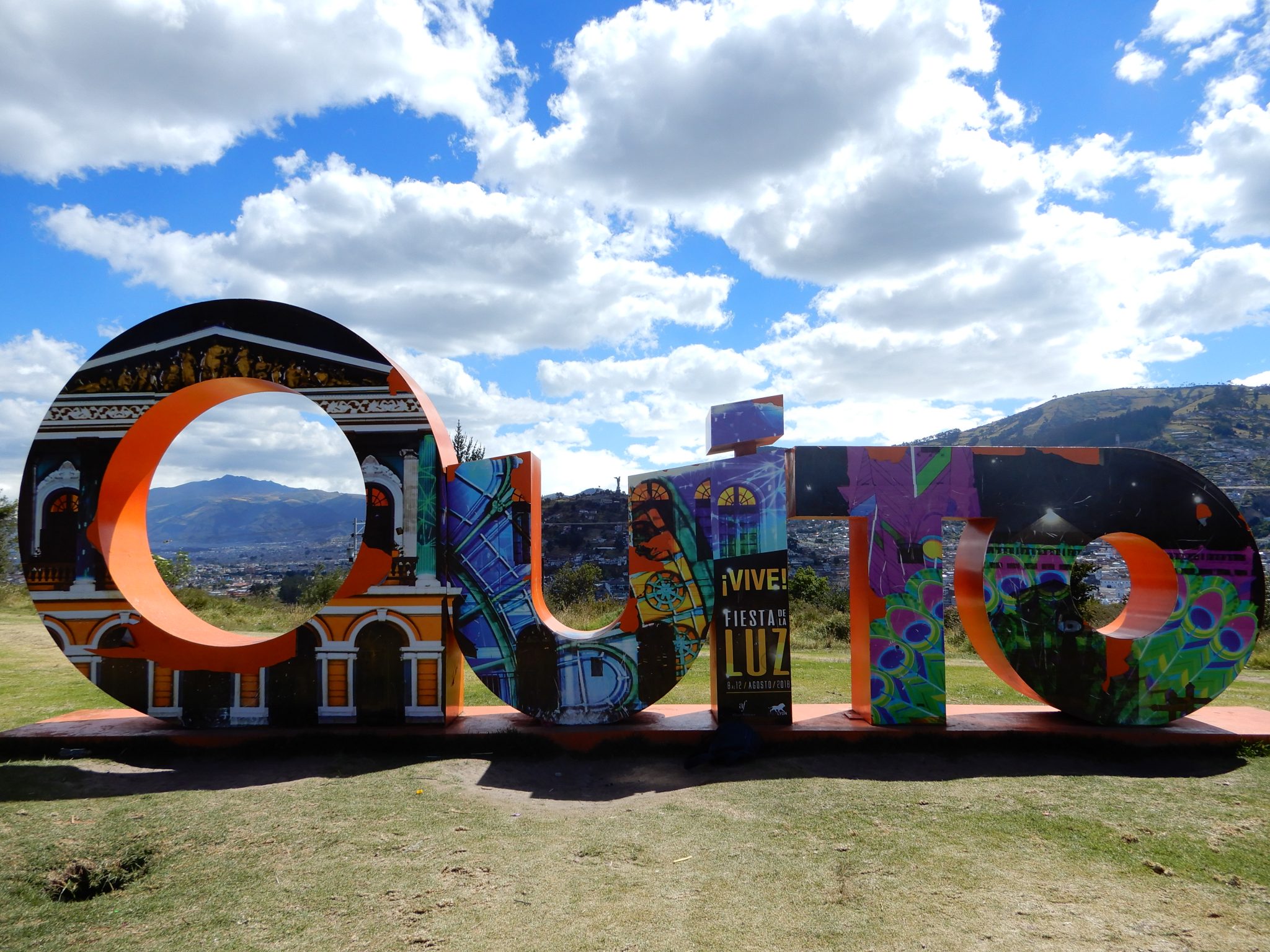 On 17th of August we left warm and tropical Cuba behind to make our way to cold and mountainous Ecuador. The capital city, Quito, is located at 2800 metres altitude, which meant we went from 35+ degrees to about 20 in only 1 day.

We both weren’t prepared for these colder temperatures, so we decided to visit the “mercado artesanal”, to buy some warmer clothes. The Mercado Artesanal is located in the Mariscal neighbourhood (also known as “Gringoland”, because most tourists decide to stay here). It consists of hundreds of stalls where you can buy typical Ecuadorian products, such as clothes made out of alpaca or llama wool. You can find anything, from sweaters and trousers to warm scarfs, gloves and hats. We clearly weren’t in the Caribbean anymore…

Simen bought an extremely warm llama sweater, since we’ll be doing quite some hikes at high altitude. The vendors reminded me a bit of the ones in Mexico, however they were nowhere near as aggressive. You still can’t walk around in peace and quiet, but at least they don’t physically pull you into their stalls! 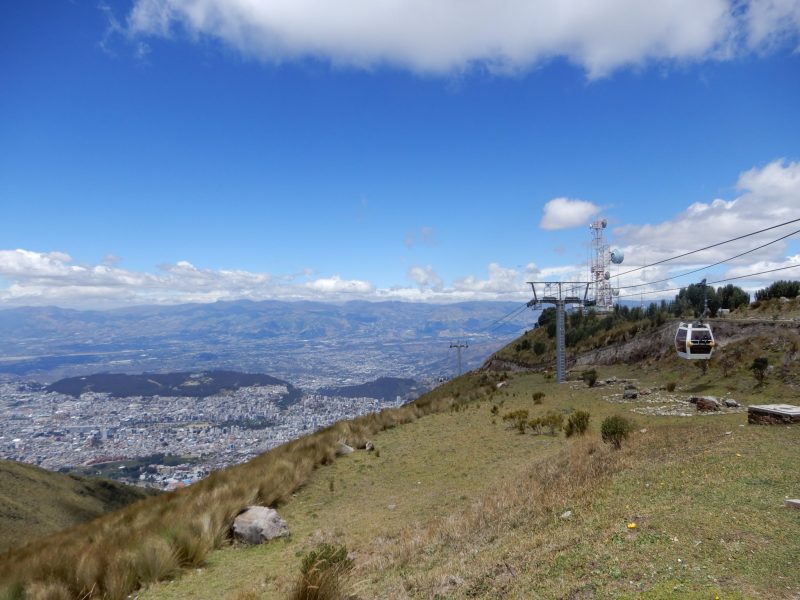 On our second day in Quito we decided to take the TelefériQo. This is a cable car that brings you to 4000 metre altitude. We took the TelefériQo on a Sunday, which in hindsight was a bit of a mistake. Apparently, almost all of Quito decides to take the cable car up on a Sunday… We spent about 30 minutes queuing just to get tickets (8.5 dollars per person, round trip), and had to wait another hour just to get in one of the gondolas! 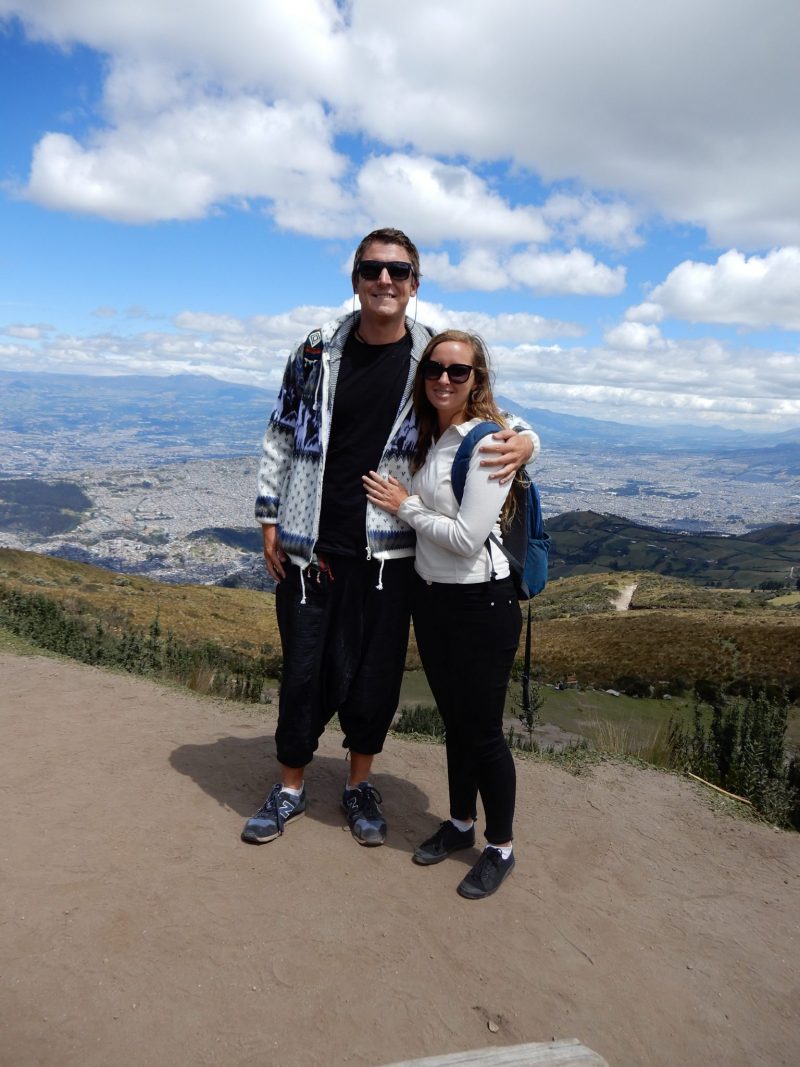 Luckily the ride up only took about 20 minutes. Once we were up we got to see the beautiful surroundings of Quito. We were a bit unlucky with the weather since we couldn’t spot any of the volcanoes around Quito, but the view was still amazing. At the top station you can find a couple of eateries, a chapel, lots of amazing viewpoints and also, a couple of swings! 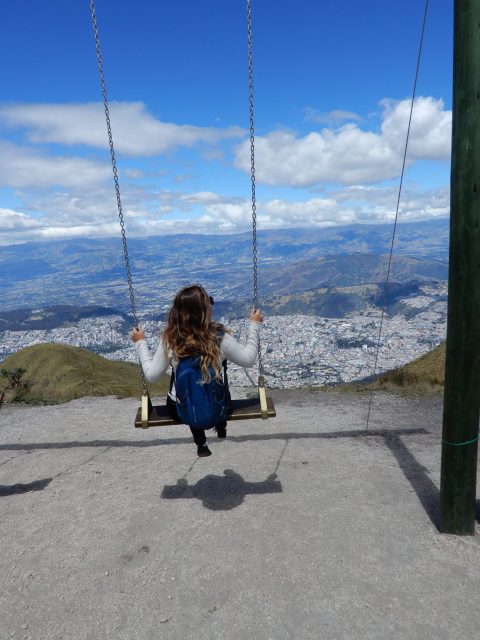 It was pretty cool to swing at an altitude of 4000 meters, with such beautiful views. We also had our picture taken with a couple of very docile and domesticated llama’s. To me, the 90 minute wait was really worth it!

After the TelefériQo experience, we took an Uber to the city centre (around 2 dollars). Quito’s historical centre is a World Heritage Site, and offers quite a lot of beautiful Colonial buildings and churches. We visited a couple of Quito’s nice plazas such as Plaza Grande, Plaza San Francisco, Plaza Domingo, etc. But because of the warnings we had read online (that Quito is a very unsafe city), we didn’t dare to wander off too far. That’s also the reason why we took quite a lot of Uber’s and Cabify’s (Ecuador’s own Uber). This, however, didn’t really give us the best view of the city. We love to just stroll around and soak up the atmosphere, but we couldn’t really do that in Quito. Maybe we were a bit too cautious and suspicious, but if you do some googling, you’ll see that a lot of bloggers describe Quito as very unsafe. 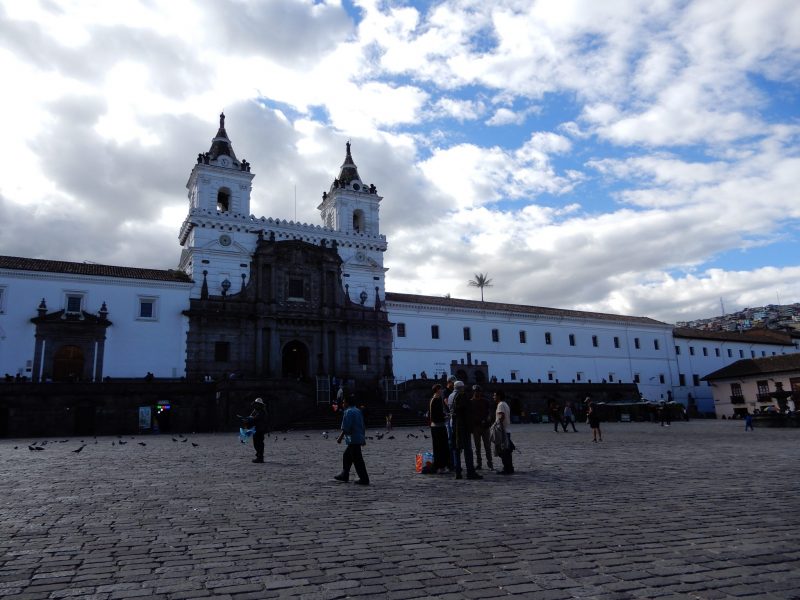 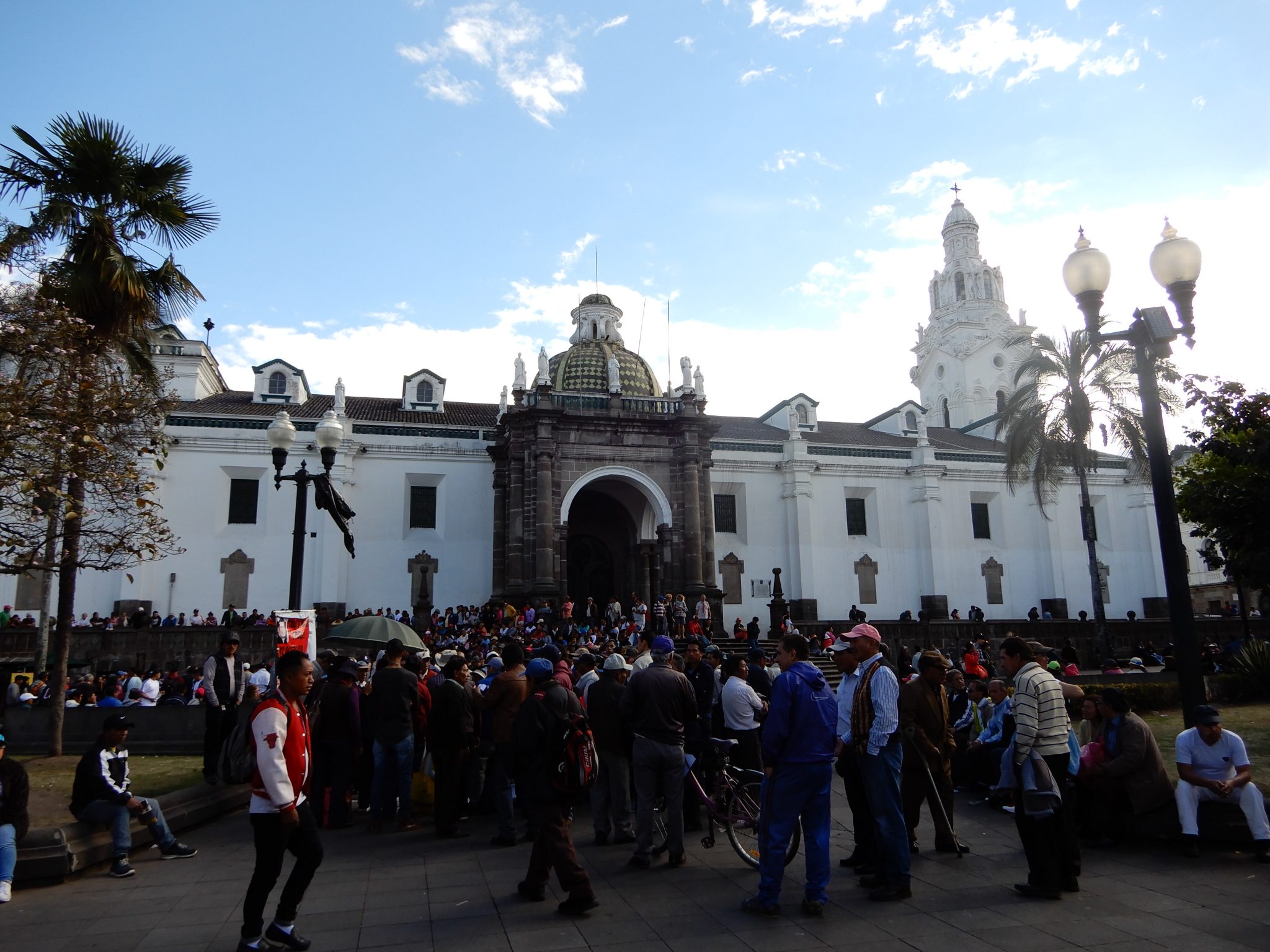 Panecillo is a 200 metre high volcanic rock which towers over Quito’s historical centre. On top of the rock there’s a statue of Mary overlooking Quito. We took an Uber up (4 dollars, but only because the driver didn’t know how to get there…). From here you get a nice view over most of Quito and the TelefériQo. You can walk around and see Quito from basically all sides. Plus, here you also get to see the Cotopaxi vulcano (if the weather is nice)! 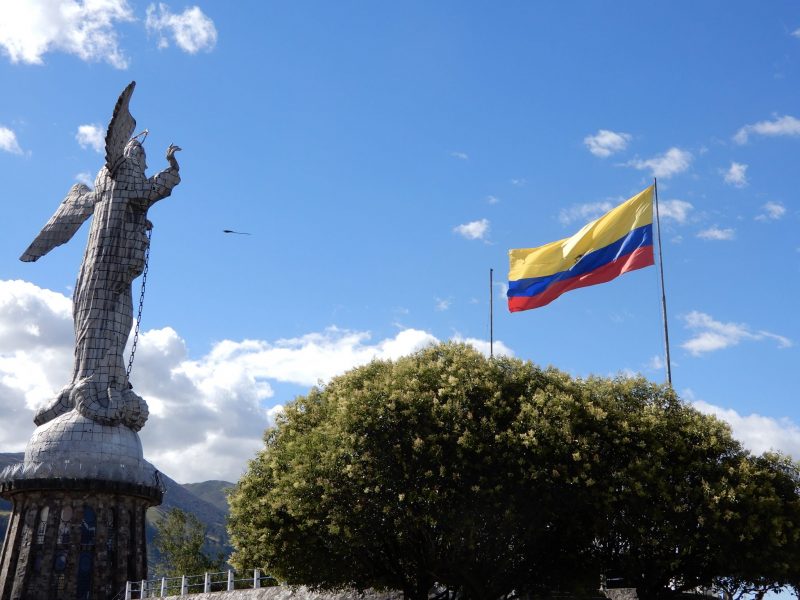 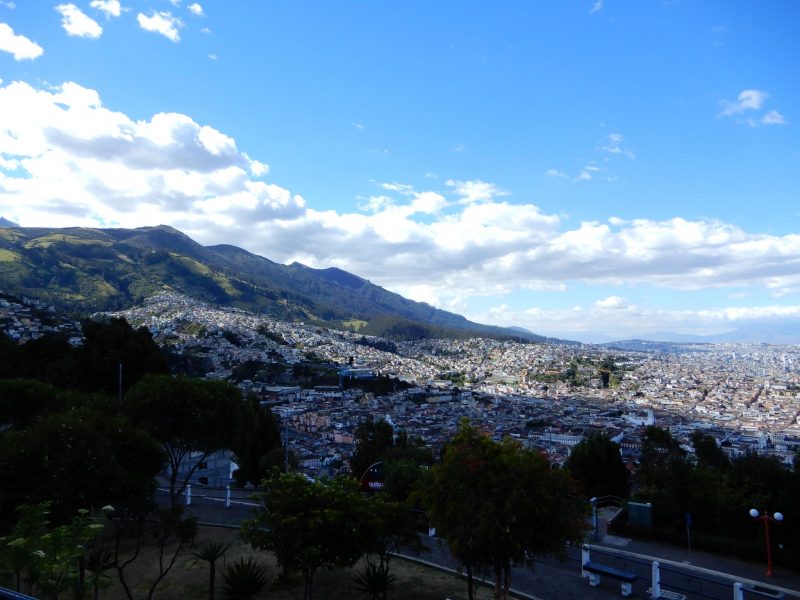 On our last day in Quito we went to the Mitad del Mundo, or “the Middle of the World”. Since we both had never crossed the Equator, we thought it would be cool to go to the most visited attraction in Ecuador. Mitad del Mundo is like a small town with different kinds of museums, restaurants and eateries. Here you can also try to balance an egg on top of a nail, which is theoretically possible because gravity is supposedly different at the equator (or so they say). 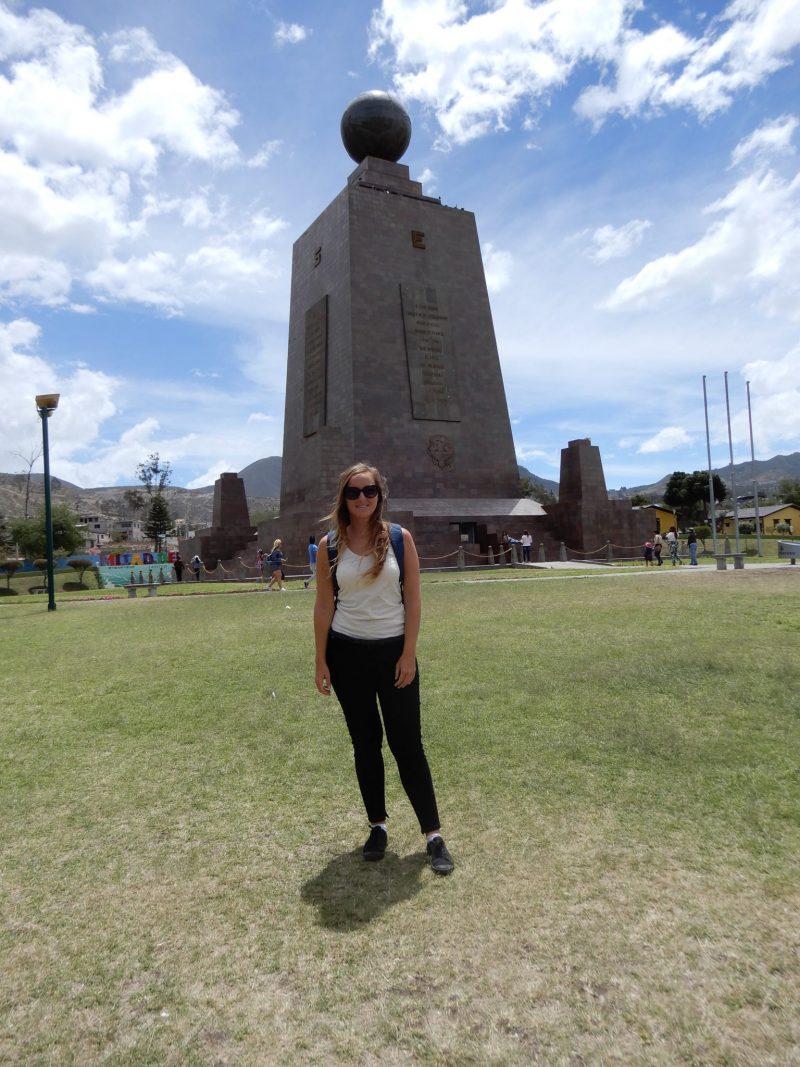 Fun fact: Mitad del Mundo is actually not the exact middle of the earth! This was based on calculations before the invention of GPS, afterwards they realised the middle of the world was actually about 200 metres away…

After 4 days in Quito we were both ready to leave the capital city behind. We decided to travel with Wanderbus Ecuador instead of with normal public transport. We chose the Colibri Pass which takes us from Quito to Cuenca, with stops in Cotopaxi, Quilotoa, Banos on the way. Wanderbus specifically caters for tourists because they stop at all the major tourist attractions and the guides are bilingual Spanish/English!

In our next blog I will write more about our stay in Cotopaxi and Quilotoa. Stay tuned!