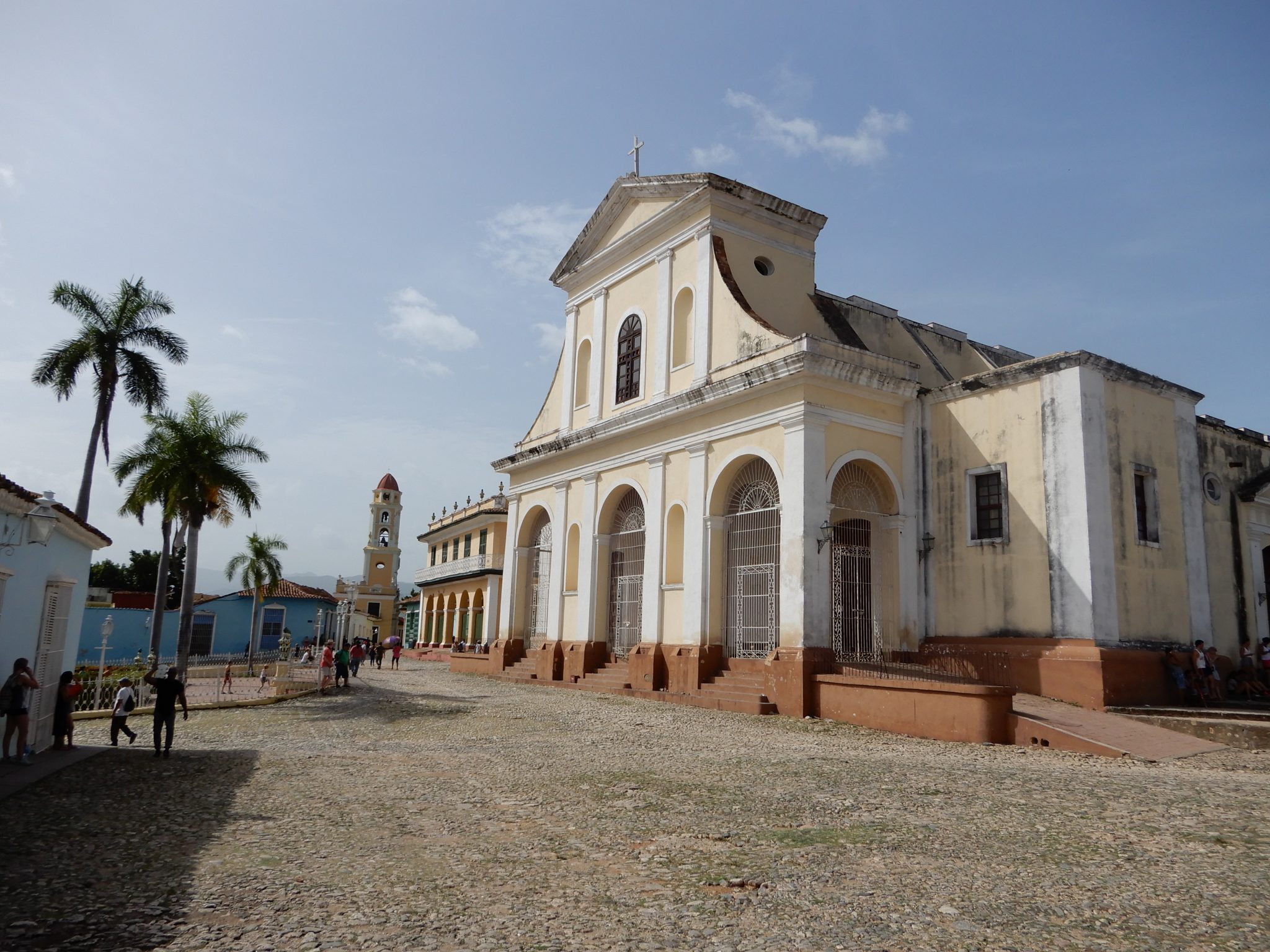 Trying to summarise 2 weeks of travelling in 1 blog post is a bit difficult, so here comes part 2! Read part 1 of our trip to Cuba here.

From the minute we entered Trinidad city centre we both fell in love. Its cobble-stoned streets (which are car free!) and colourful houses give it an extremely cosy vibe. Plaza Major is especially beautiful. The first day we mainly strolled around the city and explored the streets. To get a better view of the city we visited the San Francisco convent (1 dollar). Here you have access to the tower which takes about 5-10 min to climb and gives you beautiful views over Trinidad’s surroundings. You get to see the hills and the sea at the same time. In the afternoon we went to Playa Ancon, known as the most beautiful beach in the area (8 dollars one way). 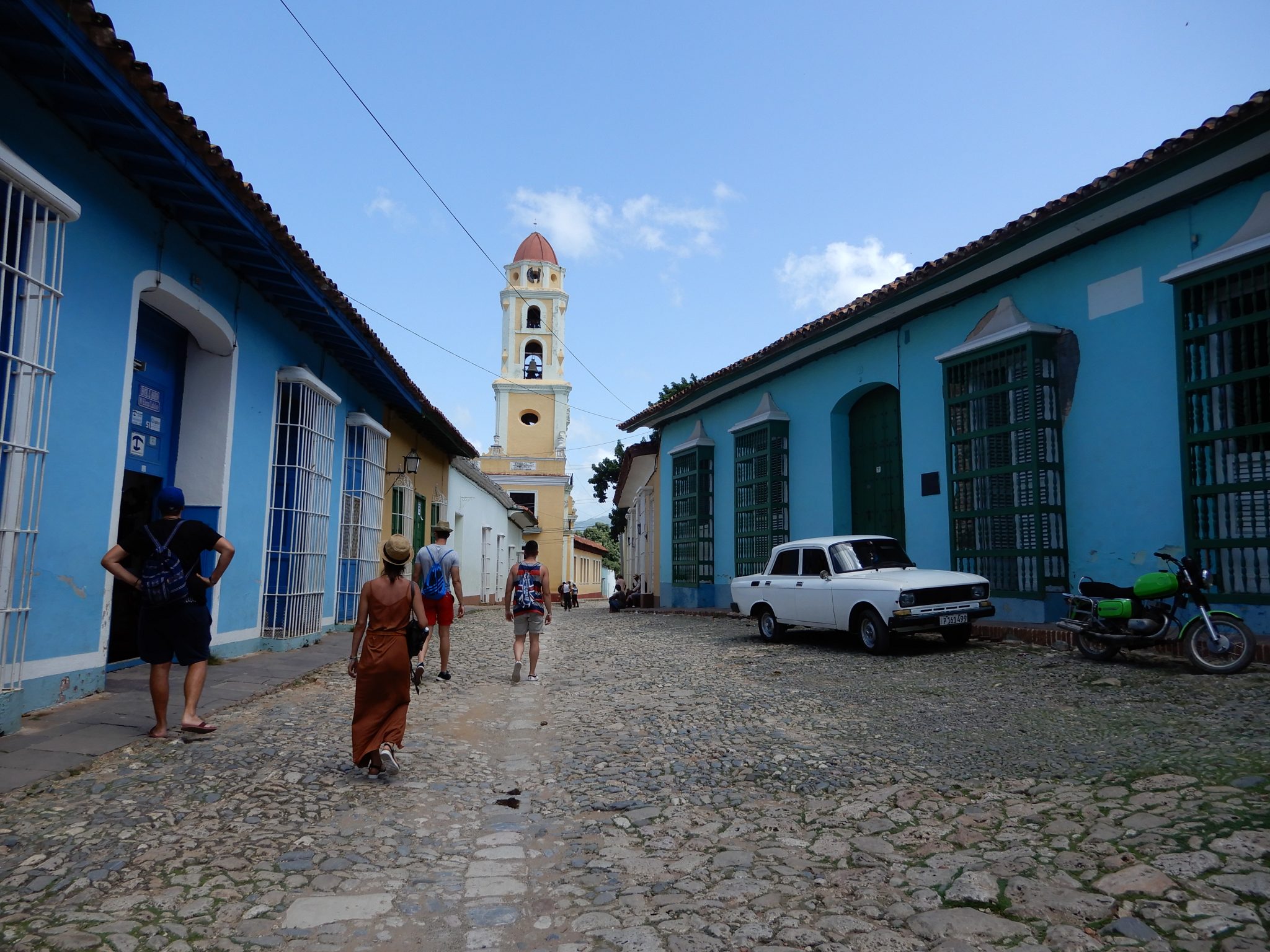 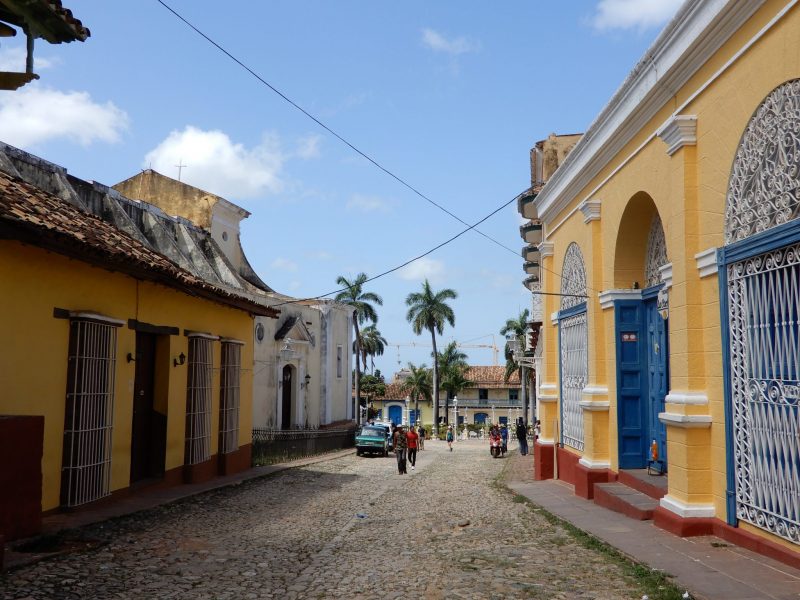 The next day we went on a horse riding tour to the Salto de Cubano waterfalls (20 dollars per person for a 6h trip). Since it was the first time for both of us, we were a bit nervous but mainly excited. It turns out we enjoyed it more than we expected, until my horse started to kick Simen’s horse and both horses started rearing! For a minute I thought my horse was going to throw me off her back, but we managed to calm her down a bit. Although, the guide made sure to keep her close to him for the rest of the tour… 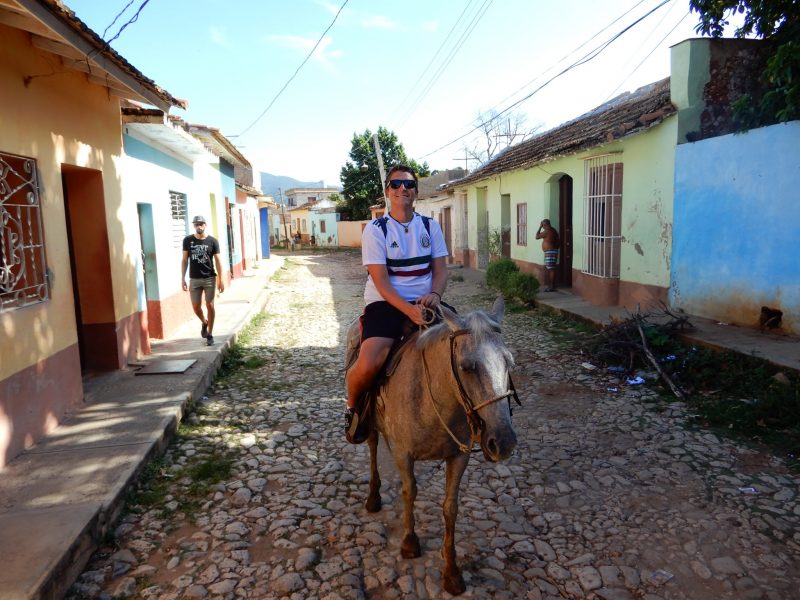 On the way to the waterfalls we stopped at a sugar cane plantation where we got to taste pure sugar cane juice (2 dollars for a natural juice or 3 for juice with rum). The second stop was a coffee and tobacco farm where we got to try some very strong coffee and got some cigars for free. Afterwards we hiked for about 10 min to the waterfalls where lots of people were swimming. It was a pretty nice tour which gave us amazing views over the Valle de los Ingenios. However, after 6h of riding a horse, we both agreed that we won’t do it again for quite some time!

The day after our horse riding adventure, we took a collectivo to Vinales. The whole journey there (7h) was extremely uncomfortable not only because we were 5 people in a very small car, but also because our whole bodies were hurting from the horse riding. I never realised how painful it would actually be! It took us almost 5 days to recover… 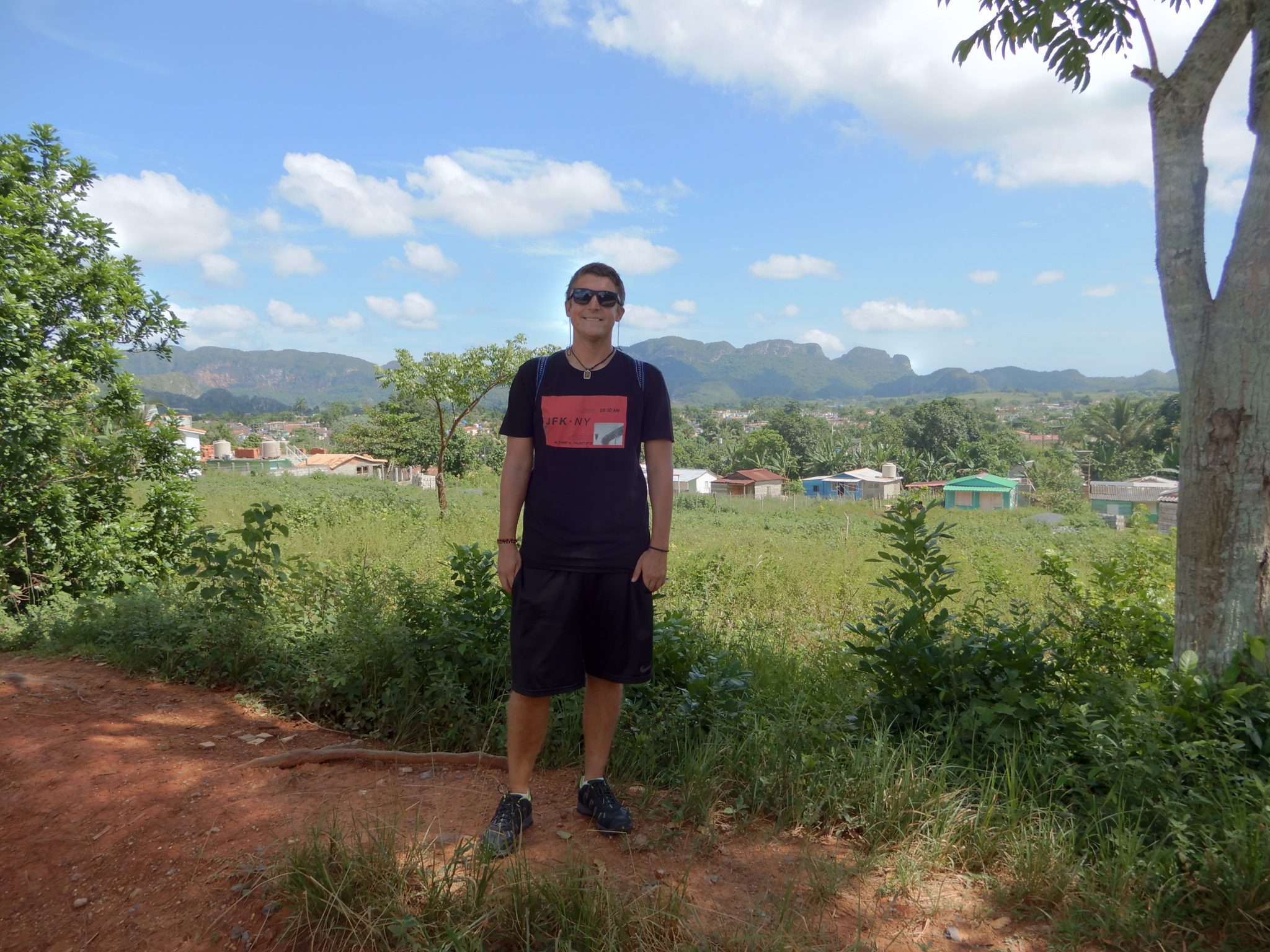 Vinales is mainly known for its tobacco production. Since we didn’t really feel the need to visit a tobacco farm,  we decided to explore the Vinales Valley. On our first day we went to a nearby lake. Even though the walk was only 6km both ways, we both couldn’t handle the Cuban heat anymore and had to call it a day at only 3 PM. Just like in Mexico, the heat in August is relentless. Luckily for us, we had made the right call because after 3 PM it started to rain like crazy (this happened every day in both Vinales and Havana). 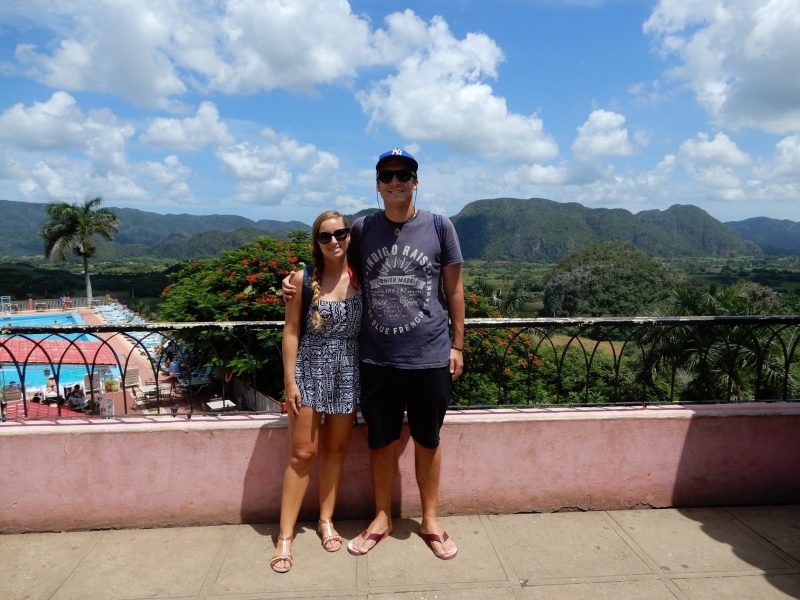 The view from Hotel Los Jazmines in Vinales

The next day we took the hop on – hop off bus to see a bit more of Vinales Valley. Our first stop was the Indio Cave (entrance: 5 dollars). The whole tour inside the cave takes about 20-30 minutes and includes a boat ride. Afterwards we took the bus back to the Hotel Los Jazmines from where you get an amazing view over the valley. For only 3 dollars we could make use of the pool, which we of course did. Unfortunately, we couldn’t swim and tan for that long because at around 3 PM we got caught in a tropical thunderstorm and arrived soaking wet at our casa particular.

Two days before our flight to Quito, we decided to go back to Havana because we both felt like we hadn’t seen enough of the city yet. We had booked 2 seats in a shared taxi, assuming we’d be sharing it with 2 more people. Once we hop in the taxi, we realise there’s room for 7 more people. The taxi was old and not very comfortable, especially for Simen who had 0 leg space and whose head was bumping against the roof of the car constantly. It was a very long 2 hour drive… 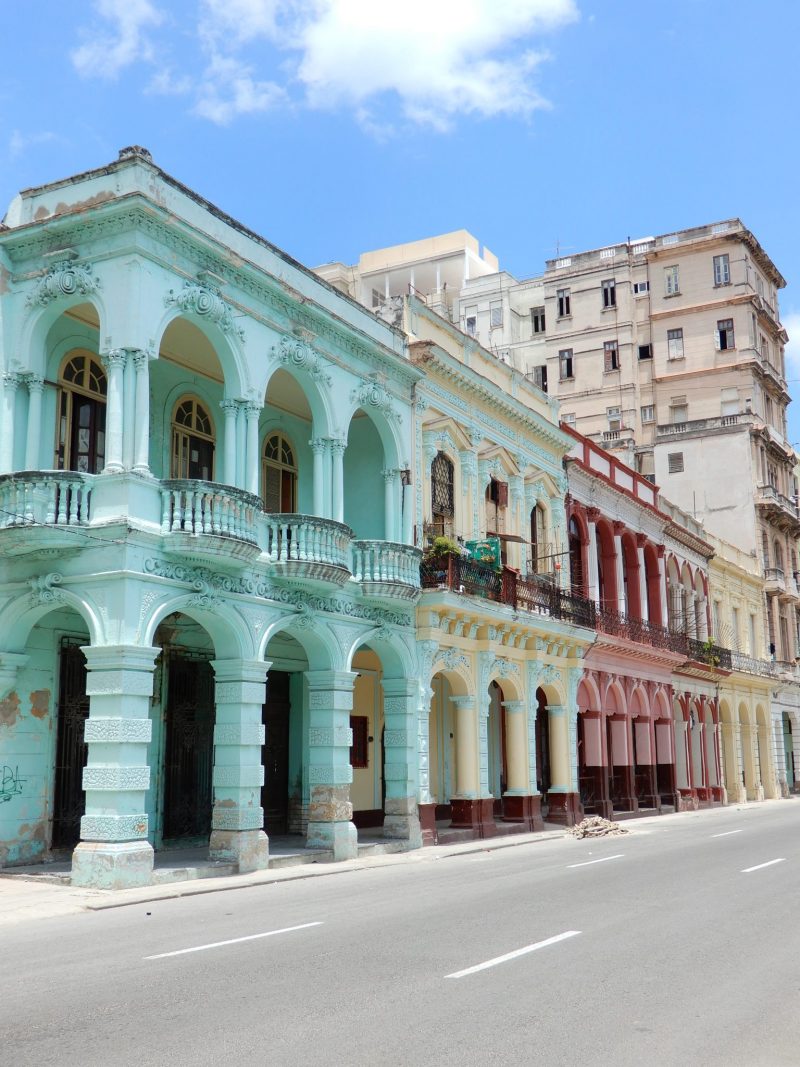 The last days we spent wandering the cosy streets of Old Havana (so charming!). We also went to the Hotel National to admire the view over the Malecon, and took a ferry to Casa Blanca (located on the other side of Havana). From here we got a spectacular view over the skyline of Havana, which was well worth the 2 dollar ferry and 8 dollar taxi. We also got to see a half eaten, dead tarantula, which was enough for me to constantly keep an eye out in case I’d see a live one… 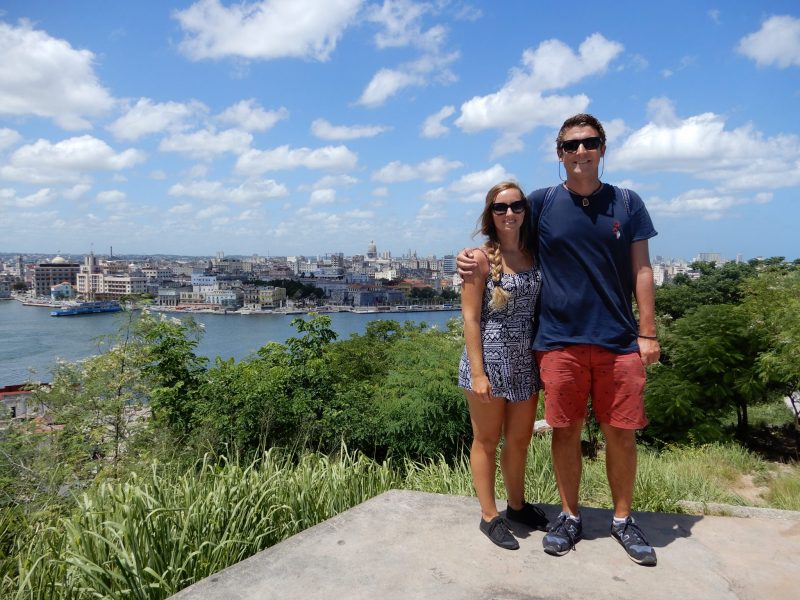 View on Havana from Casa Blanca 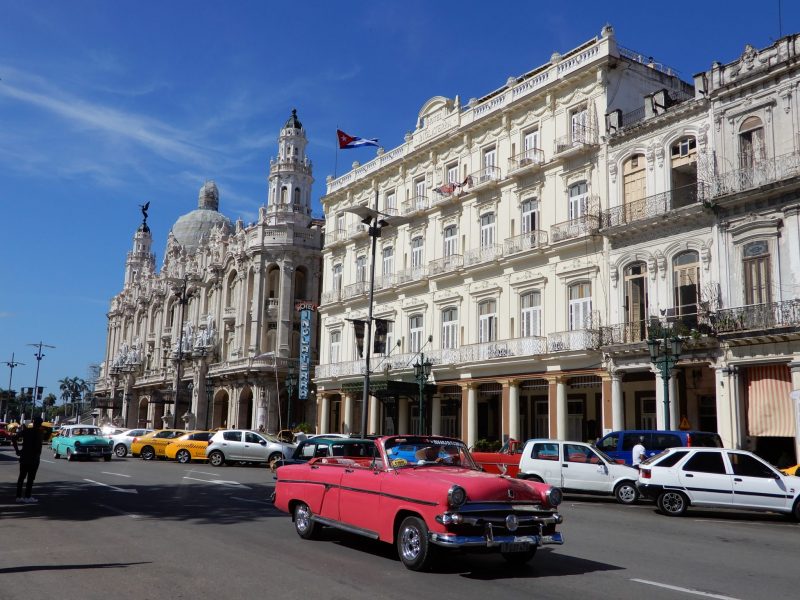 We both really loved Cuba! The landscape is extremely varied. Varadero offers tropical beaches, Trinidad is an amazingly beautiful Colonial town, Vinales has beautiful mountains, Havana has tons and tons of charm. We would recommend Cuba to anyone! The only downsides for us were, as Simen already pointed out, the public transport and the food.

In the meantime we’ve arrived in Quito, Ecuador. We’ve already noticed it’s much colder here and Simen needs to adapt his wardrobe once again! We’ll keep you posted about our adventures in Ecuador!