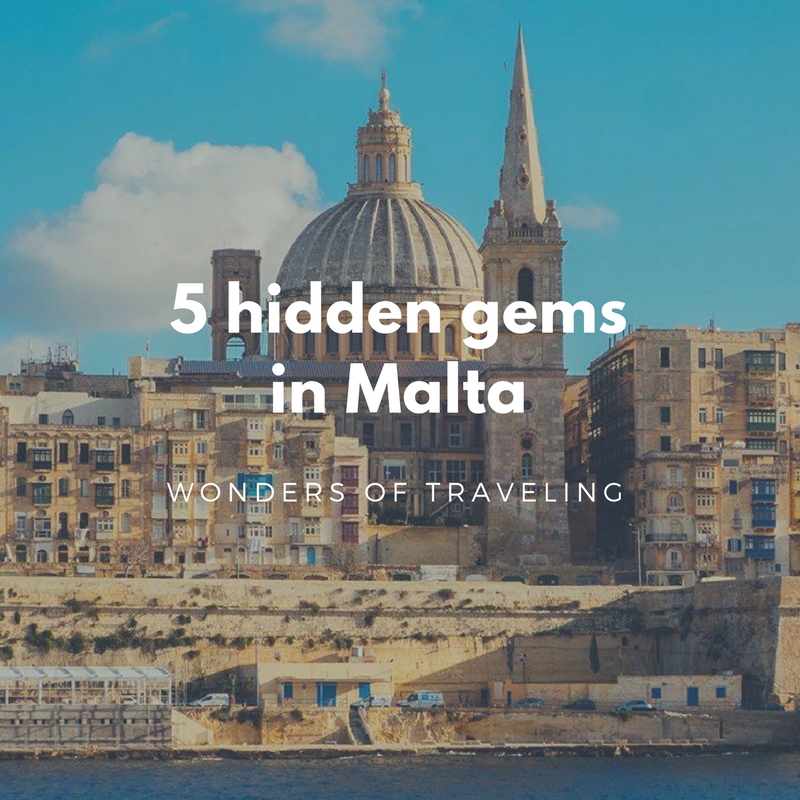 The last two years I’ve been living in Malta, which means I have gotten plenty of time to explore this sunny, but very small island. Yes, Malta is extremely small. It takes less than an hour to travel from the most southern to the most northern point.

Every year millions of tourists travel to “the rock” to enjoy the amazing climate. Most of them head to Valletta, Mdina, Sliema or Bugibba, but Malta has so much more to offer than these crowded places. Today I want to talk about 5 of my favourite spots in Malta which have remained quite undiscovered.

Fomm Ir-Rih is a beautiful bay north of Rabat, on the west coast of the island. When my boyfriend took me there for the first time I was completely blown away. It’s quite a rugged coast, and you have to walk down for 10 to 15 minutes on somewhat of a mountain trail, so it’s not accessible to everyone. However, the short hike down will be more than worth it. The water is crystal blue and looks extremely inviting.
If you don’t mind another hike, you can walk further along the coast in the direction of Golden Bay. You will pass by several beautiful spots where you can relax, swim or have a picnic. I do have to warn you that it is not possible to hike from Fomm Ir-Rih to Golden Bay. I have tried before and I ended up having to swim part of the way because the trail disappeared. However, if you stay close to Fomm Ir-Rih you will not be disappointed at all!

If you head to the north of Malta, you can spot this beautiful wonder of nature. You can either drive to Ahrax, or you can walk from Mellieha along the coastline, like I did. Either way, you have to stop at Dragonara Cave. Not only do you get beautiful view on Comino and Gozo here, you also get to see this spectacular and quite large cave. Lots of divers also make their way to this cave because it’s a very nice diving spot!

Wied Il-Ghasri is another amazing spot to swim. In order to get to this hidden gem, you have to travel to the island of Gozo and drive up north. This place is also very popular amongst divers who love to explore the surrounding caves.

Whenever I go to Gozo I try to plan a visit to Wied Il-Ghasri because it’s an incredible place to swim. The narrow and winding bay will make you feel like you’re one of the very few people on the island (which doesn’t happen often in Malta). However, I have noticed that more and more people find their way to this beautiful spot. It is basically impossible to get the bay to yourself, but that doesn’t matter because you can still enjoy the crystal clear water!

I discovered this spot by accident. My parents were visiting Malta and we decided to head to the temples of Hagar Qim for a hike (there are tons of trails there, if you’re into hiking). We decided to sit down for a picnic at the Hamrija watchtower, when all of a sudden I spotted this beautiful “mini” Azure Window, as I like to call it. This was before the actual Azure Window collapsed, so I didn’t realize yet that this might be one of the only natural arches left on the island.

If you miss the Azure Window and want to see something like it (it is much, much smaller though), then you should definitely head to this spot. You can also hike from the Hamrija Watchtower to Ghar Lapsi, which is also a nice and lesser known spot.

This is another one of my favourites. If you find this cave, you’ll be treated to an incredible view all over Ramla beach. This beach is already a must see in itself, because of its red sand. To get to the cave you have to drive towards Ramla Bay, but before starting the descent you have to take a right after the town Nadur. Follow a couple of windy roads while you pass by some farms until the road ends. Here you will already get an amazing view on Ramla Bay, but if you just walk a little bit further you will see the entrance to the cave. It’s basically a small tunnel which you have to enter. I have been there several times before, and I got the cave to myself at least twice. So, if you’re lucky you might do too!

Do you know any other hidden gems in Malta? Please feel free to share them in the comments!

Next Post → Which side of the Grand Canyon is the best to visit?