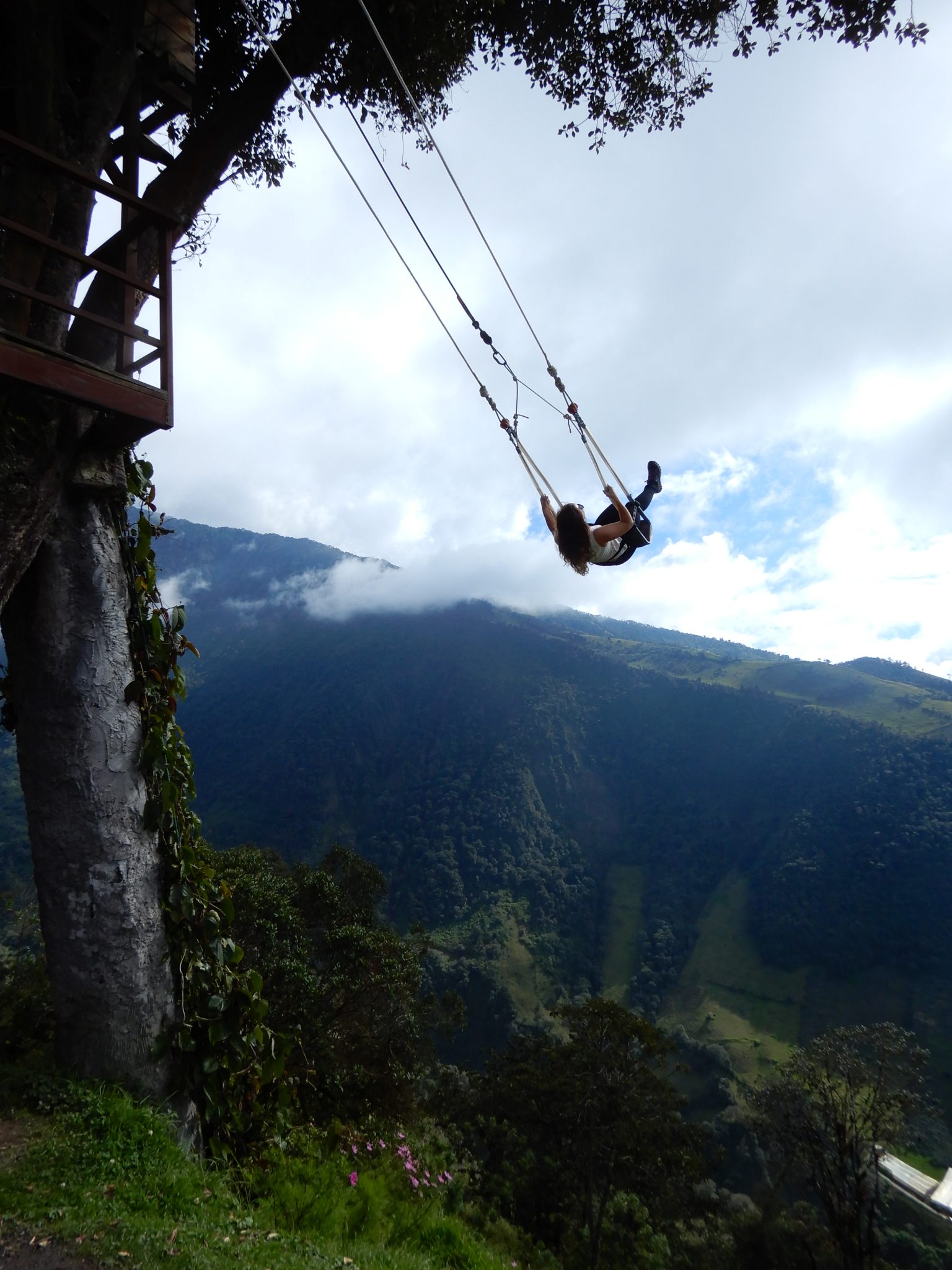 Last week we travelled to Baños, where we stayed for 4 days. Unfortunately, I got sick on day 3 which meant we didn’t get to do all the activities we wanted. Baños is a very nice backpacker’s town which has tons of cool things to offer. We were both really happy to be in a city again, after our 5 day stay in Cotopaxi and Quilotoa.

One of the highlights of Baños is the “ruta de las cascadas” (waterfall route). Baños is surrounded by lots of impressive waterfalls, which you can visit by bus, taxi or bike. We opted for mountain bikes, which we rented for 10 dollars each for a whole day (we rented our bikes at Geo Tours). Geo Tours gave us a map and a couple of directions and we were on our way. The route is about 18 km long and takes you past 6 waterfalls and tons of adventurous activities such as ziplining, climbing Tibetan bridges and taking small cable cars from one side of the valley to the other. We decided to take one of those cable cars for 2 dollars each. It took us over one of the waterfalls, which was really cool to see! 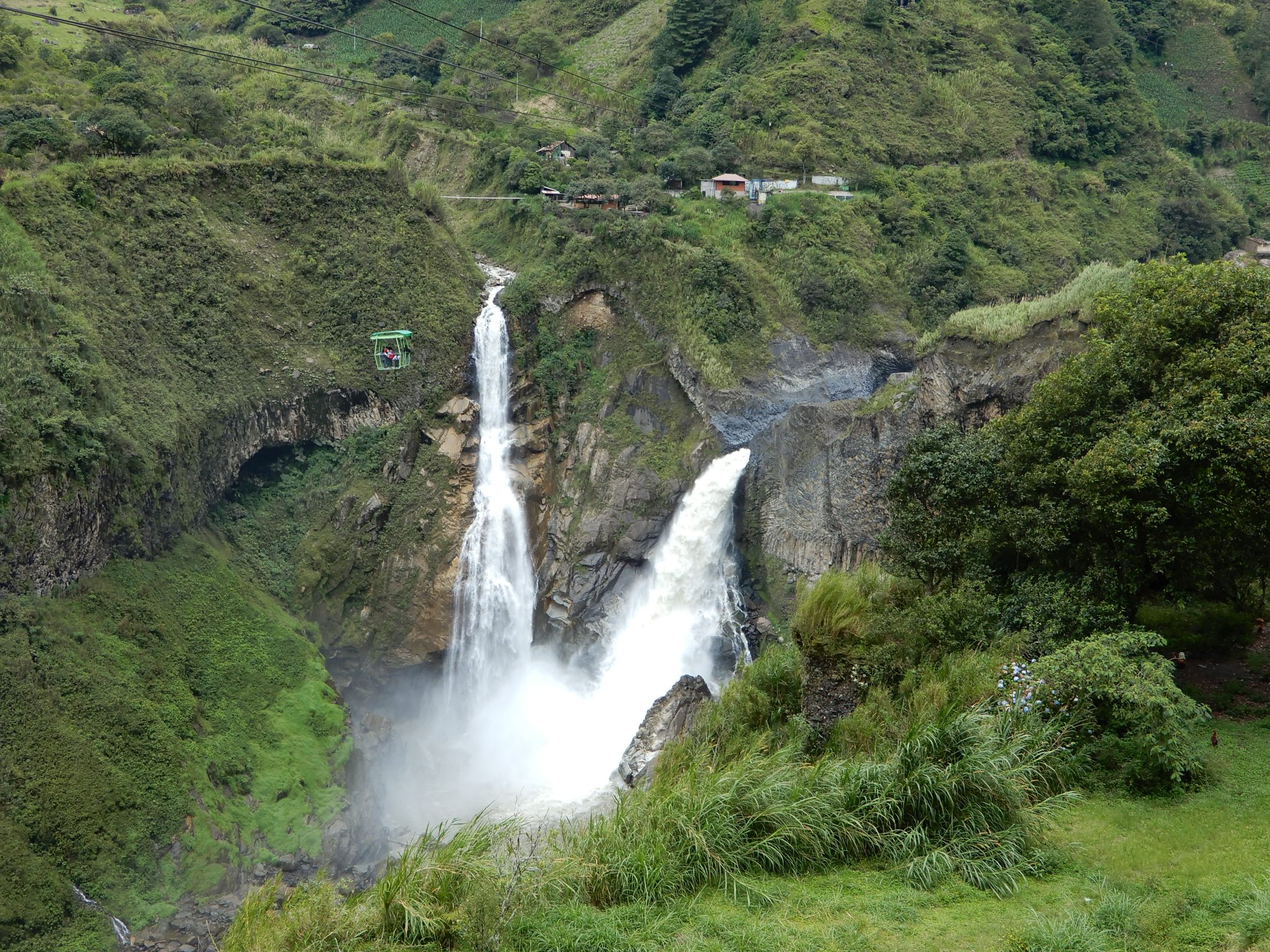 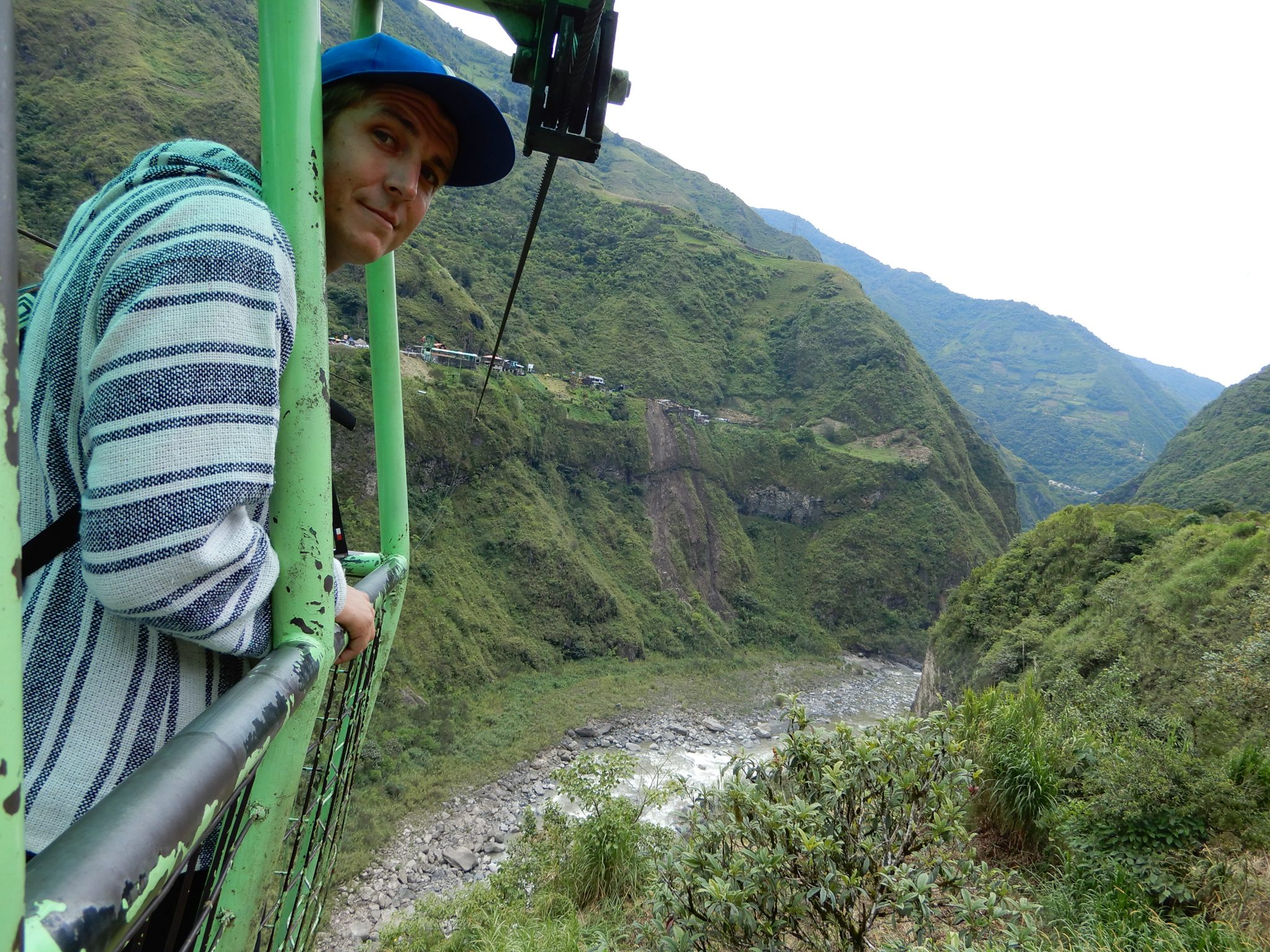 Most of the route is downhill, which makes it a very pleasant bike ride. The views on the way are really spectacular! We stopped several times to check out the ziplining, but Simen thought they weren’t adventurous enough so he didn’t try it out. 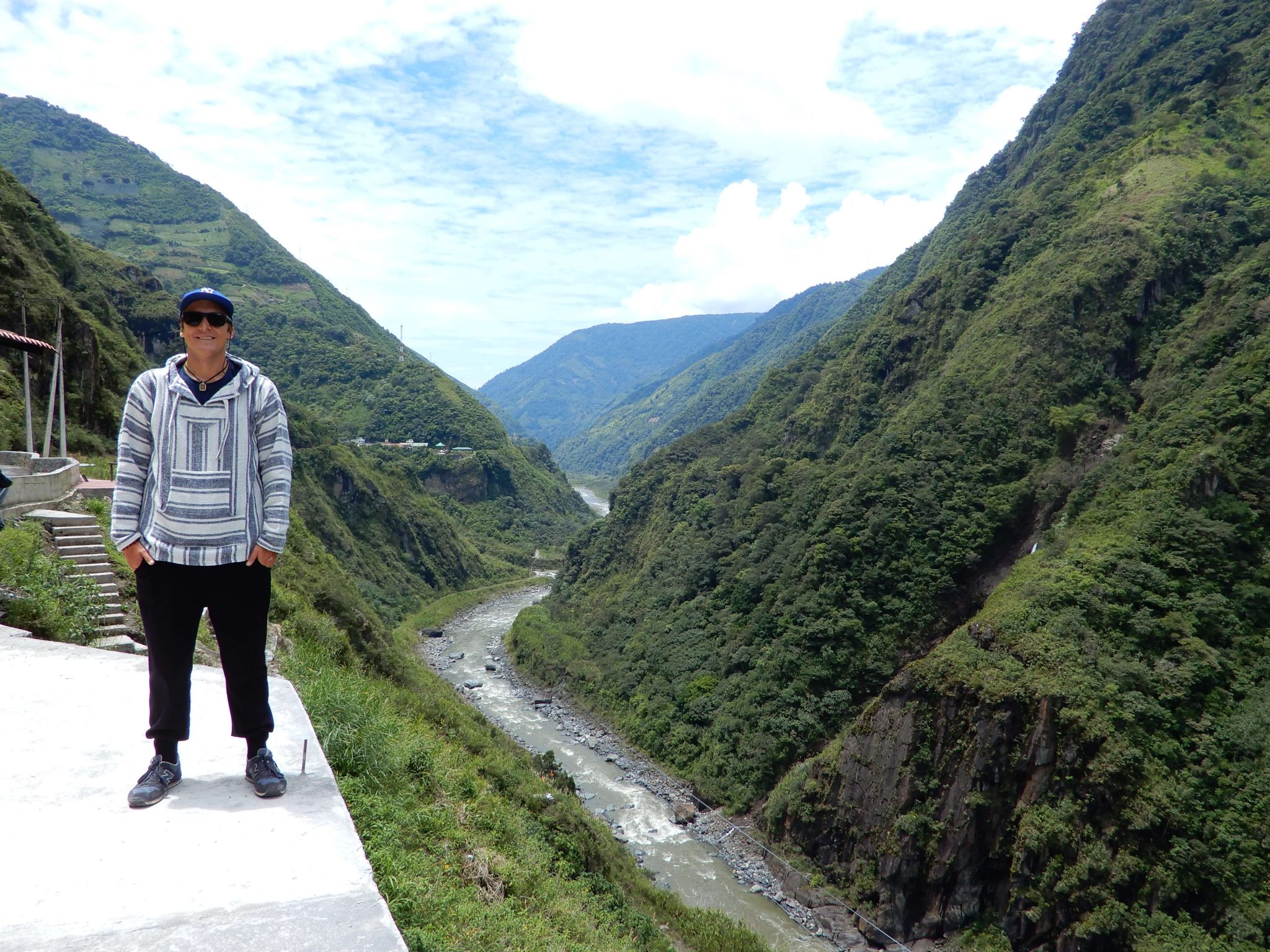 We continued our bike ride until we reached the most famous and most popular waterfall: the pailon del Diablo. There are 2 entrances to this waterfall in Rio Verde, one before and one after crossing the bridge. We started with the entrance which is located after the bridge. We walked for about 25 minutes until we arrived at the ticket booth (2 dollars entrance) and we hiked the steps up to the impressive waterfall. The closer we got to the waterfall, the more it felt like we were taking a shower. Now I understood why street vendors were selling poncho’s at the entrance…

The waterfall is very big and extremely impressive! There’s a possibility to walk over to the other side of the waterfall, but you need to crawl through a small, cave-like, passway. It was pretty clear that Simen was way too tall for this passway, so we decided to hike back up and go to the other entrance. This meant we had to pay another 2 dollars entrance fee, but it was definitely worth it. It was really cool to see the waterfall from above (if you go to the other side, you see it from below). 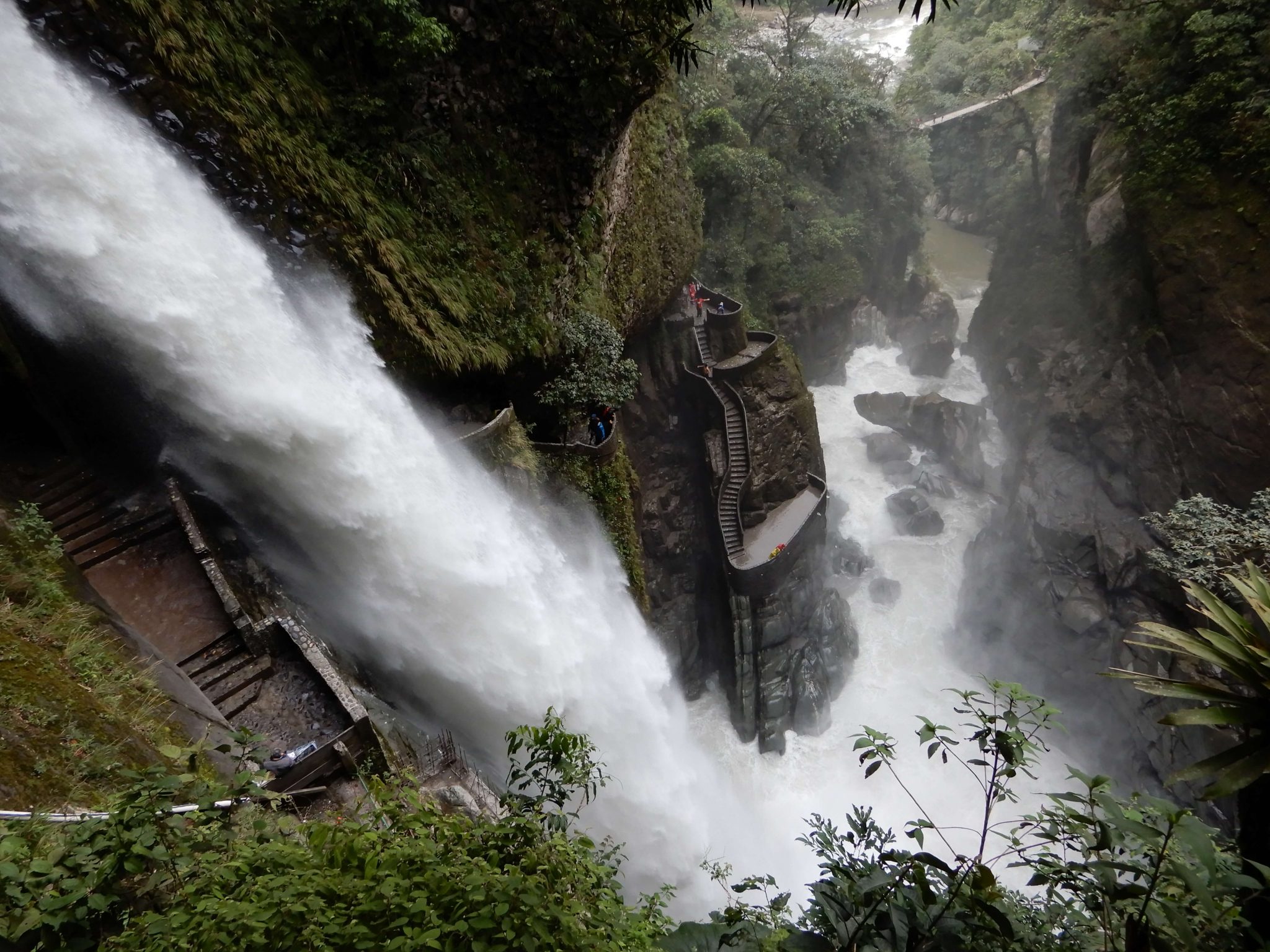 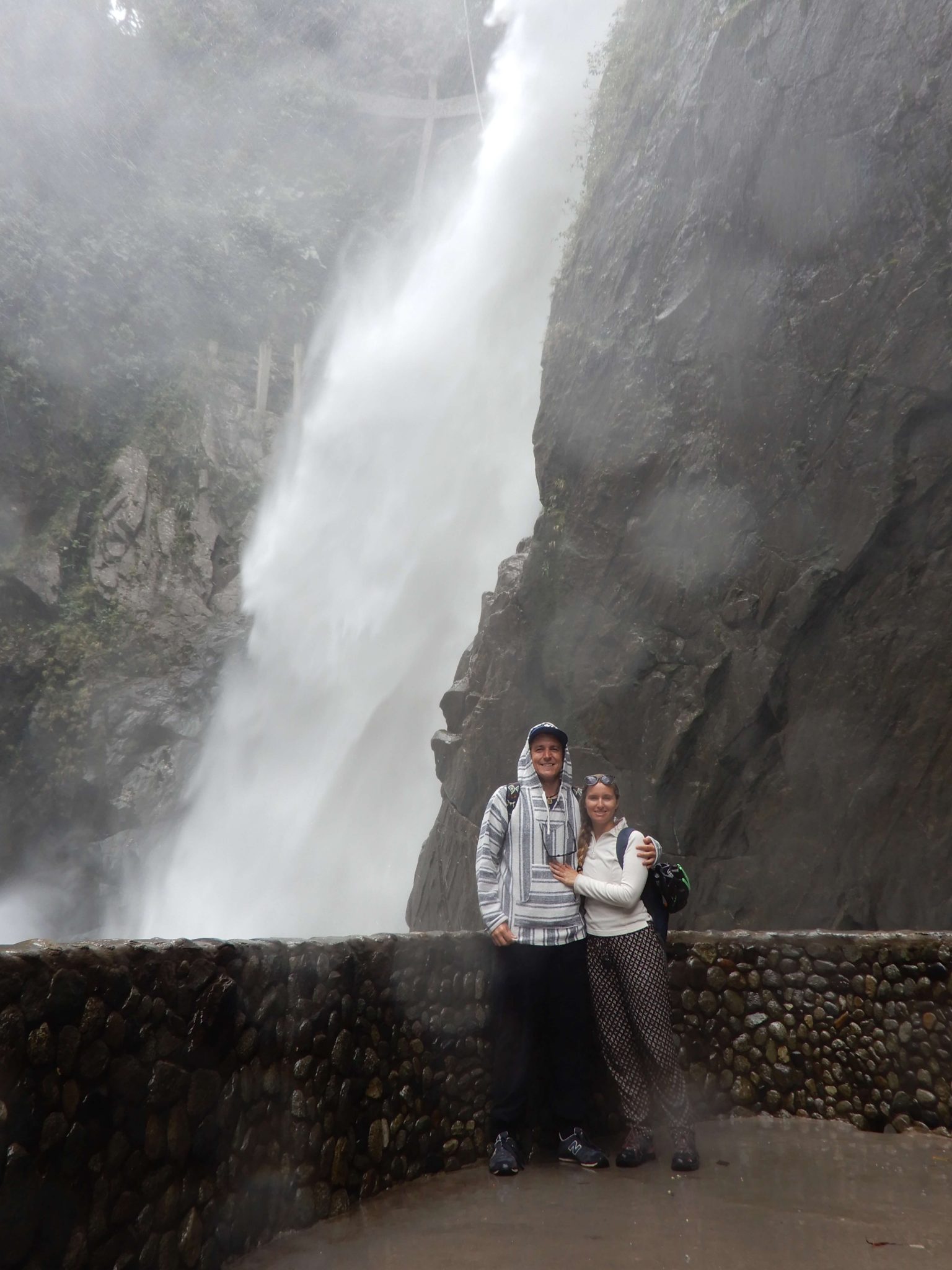 After seeing the Pailon del Diablo from both sides, we decided it was time to go back to Baños. We didn’t feel like biking all the way back, so we took one of the trucks who wait in Rio Verde to pick up bikers. For only 2 dollars per person we got a ride back! It wasn’t the most comfortable ride though… We were 10 people crammed in a small truck, sitting on small wooden benches which moved every time the truck took a turn. Also, every time the driver would brake, it sounded like several cats were being strangled… I was happy to arrive safe and sound in Baños!

On Thursday I already felt a bit under the weather, but I still wanted to visit the Casa del arbol. This is a small tree house with 2 swings attached to it. You basically swing over the edge of the mountain! We took the bus from the corner of Calle Pastaza and Vicente Rocafuerte for only 1 dollar. About 45 minutes later we arrived at the Casa del Arbol. You have to walk up the hill for about 5-10 minutes until you reach the ticket booth (1 dollar). On the way you’ll see more swings, but you have to follow the signs to get to the actual Casa del Arbol.

We queued for about 10 minutes until it was our turn. I was a bit nervous about swinging over the edge of the mountain, especially because the guy who pushes everyone makes sure you make a couple of spins as well! Once I sat down I realised there was nothing to be afraid of! There’s an extra belt attached to the swing to keep you safe. It was a very nice experience which I would recommend to anyone. Plus the whole trip only cost us 3 dollars each, so it won’t set you back much!

On the way back to the bus, we spotted another swing which went upside down. Of course, Simen was super excited and immediately jumped on (3 dollars). He didn’t realise the swing went upside down almost constantly and all the spectators were very much entertained by his “Jesus Christs!” and “For fuck’s sakes”. 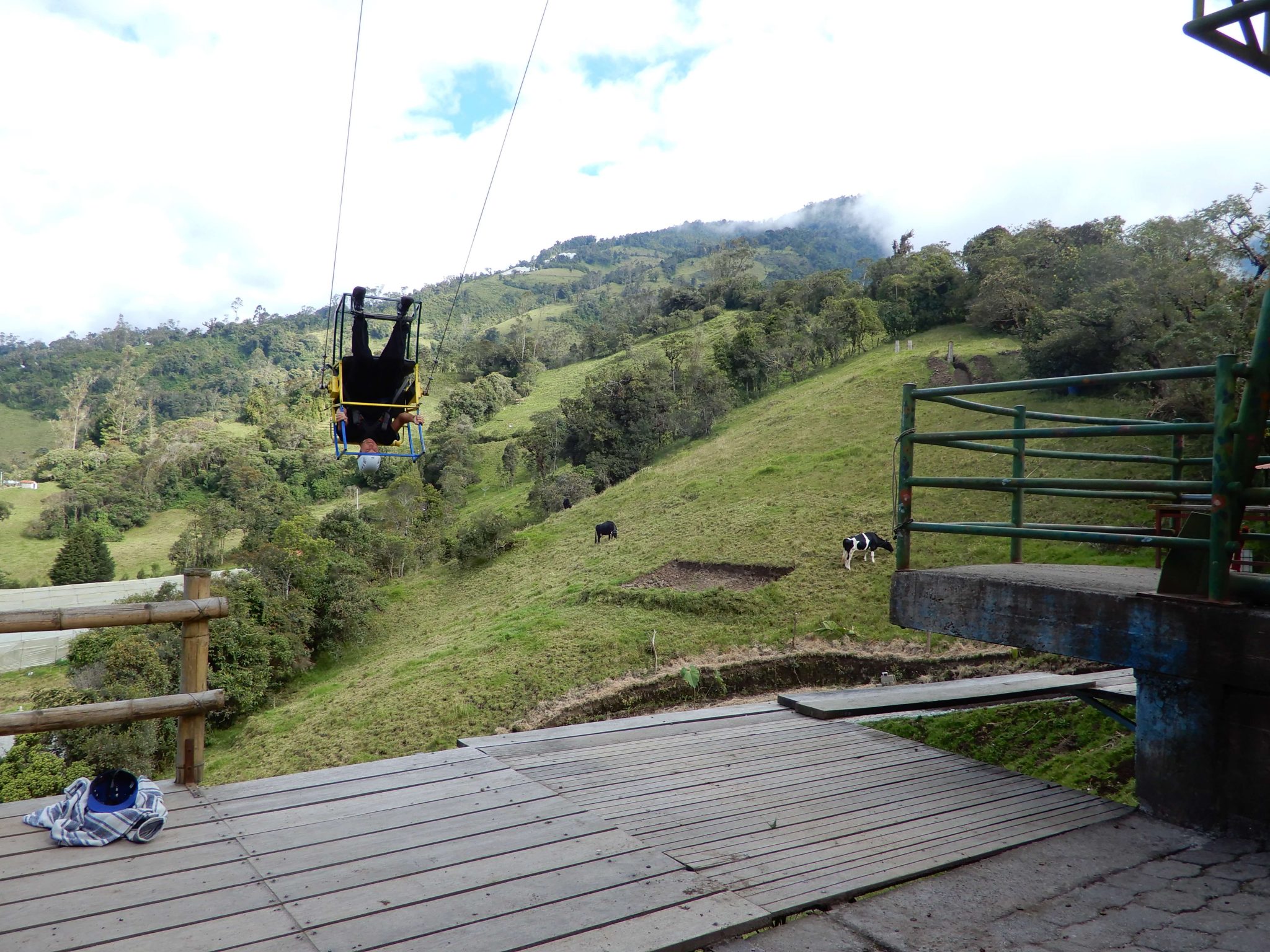 The rest of our stay in Baños I spent inside the hotel room… Simen luckily didn’t feel bad so he went rafting with Geo Tours. It was the first time ever he went rafting and he really enjoyed it! After Baños we travelled to Cuenca where we will be staying until we leave for Peru tomorrow night.

Next Post → Great Places to Travel for a Yoga Retreat