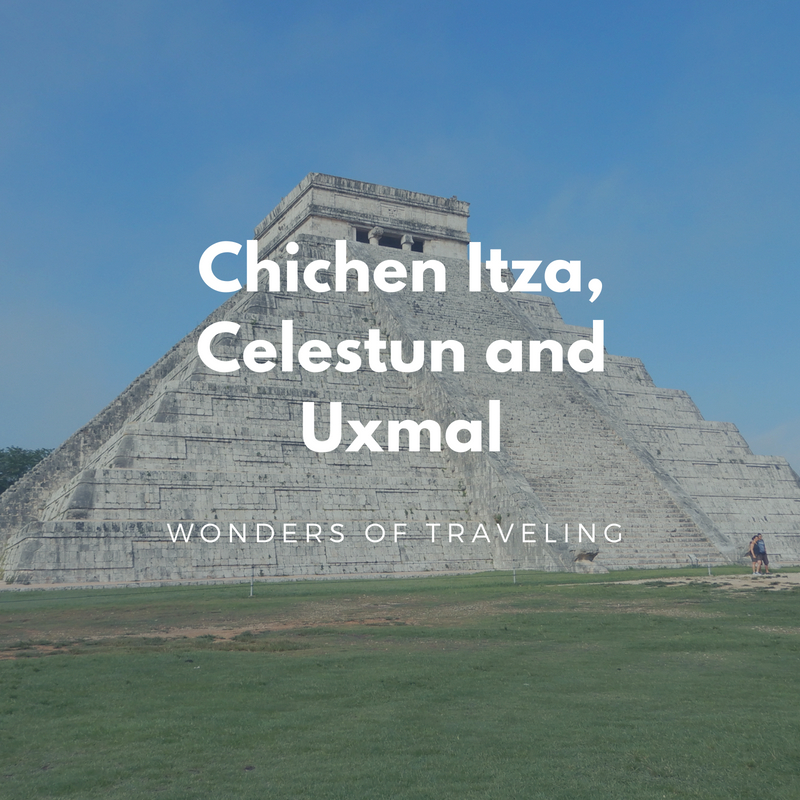 On Wednesday we made our way over to Pisté, where we spent the night before getting up early to visit Chichen Itza. We made sure we were at the entrance of the park by 8 AM to beat the crowds and the (annoying) vendors. Luckily, our strategy worked because for about 2 hours we had to share the park with only a handful other people.

Chichen Itza is one of the seven new wonders of the world, and I was psyched to see it with my own eyes. Simen was not as enthousiastic as me, but after laying eyes on the Castillo, he had to admit it was a lot more impressive than he had imagined. The entrance ticket cost us about €12.50, which gave us access to all of Chichen Itza. We explored the park for about 3 hours, admiring the inventiveness and craftsmanship of the Mayans. Pictures don’t really do it justice!

2nd wonder of the world ✔️ Exploring Chichen Itza was an amazing experience and did not disappoint at all! #chichenitza #yucatan #mexico #notallwhowanderarelost #exploretheworld #travelgirl #wanderers #travelblogger #traveltheglobe #wanderlust #instago

It was particularly nice to arrive so early because by the time we entered the park, the vendors were still in the process of setting up their stalls. This meant we could explore the park without being shouted at. The big masses started to arrive around 10 when the tourists buses from Cancun arrive, which meant we had the park almost to ourselves for about 2 hours.

After visiting Chichen Itza, we decided to kill some time before taking the bus to Mérida at 4.15. Being punctual as we are, we were already waiting by the bus stop at 3.45, only to wait until 5.05 before being able to get on the bus! México feels a bit like Malta from time to time, it’s very mela.

Mérida is the capital of Yucatan and the home of about 700.000 people. We basically went from a rural village like Pisté, to a massive city, which took a bit of adjusting again. On our first day in Mérida we decided to explore the city a bit more. It reminded us a bit of Valladolid, because of its colourful houses. The Plaza Grande is beautiful and definitely worth a visit.

In the meantime we were looking for tours which could take us to Celestun, a fisher village where you can take a boat ride to spot flamingo’s. After asking around, we came to the conclusion that it was cheaper to rent a car (€40 for 24h) than to take a tour (€80 for 2 people)! So we decided to rent a car on the spot.

Today we left early to make our way to Celestun, about 1.5 hour drive away from Mérida. In reality, though, it took us more than 2 hours because Google Maps sent us to a small village in the middle of nowhere… Luckily we managed to get back on track and made it to Celestun by 10 AM, eager to see some flamingo’s. We had to wait for 4 more people to share a boat with, and suddenly a Belgian family showed up who were more than willing to share a boat with us!

The boat ride took about 1.5 hours, during which we got to see lots of different birds like ibises, pelicans, and of course flamingo’s! Apparently in January, you can spot thousands of flamingo’s. We, however, got to see “only” about a several hundred. This didn’t spoil the experience though, as it was still very entertaining to see flamingo’s in the wild! During the boat trip, the captain also took us through a mangrove, which was quite cool to see.

Since we had rented the car for 24 hours, we decided to add another stop on the way: Uxmal. This should’ve taken us about 1 hour,  however it turned into about 2 when we realised there were no gas stations to be found anywhere… The only gas station in Celestun didn’t have the gas we were looking for (Premium), so we started the search for the closest gas station on the way to Uxmal, which was… 50 km away!

On the way from Celestun to Uxmal, there is literally nothing. No shops, no toilets, nothing. It’s basically just kilometers and kilometers of endless road surrounded by trees. The arrow kept on edging closer and closer to the “empty” sign and we were still about 25 km away from the nearest gas station… I already started imagining having to call and explain to someone in Spanish that we ran out of gas!

By the time we finally reached the gas station, the arrow had even dropped below the “empty” sign and the sign had started flashing alarmingly… We thought our rescue was near, until we realised this gas station also didn’t have Premium! I honestly thought our car wasn’t going to start anymore by this point, but we decided to try our luck at yet another gas station about 6 km further up the road. Luckily for us, this one finally offered premium! Now we could finally really make our way over to Uxmal, thank God!

Uxmal is a Mayan city which dates back to about 800 A.D. and was one of the most important Mayan sites. The entrance fee was about €12.50 per person (parking space: €1,40). When you enter the park, you immediately see the most impressive building out of all of them, the Pyramid of the Magician. Unfortunately, you can’t climb this pyramid, but you are allowed to climb some of the other buildings such as the South Pyramid. From here you get a nice view all over Uxmal.

After visiting Uxmal, it was time to head back to Mérida to return the car. Just as I told Simen that everything had been going smooth-sailing so far (after the detour and the gas emergency earlier), we were pulled over by the police… They asked all kinds of questions like “where are you from”, “what are you doing in Mexico?”, “show us your ID please”, etc. Suddenly they started to search our car from top to bottom. They were sending our license plate over to other policemen… Even though we both knew we hadn’t done anything wrong, we were still quite nervous… Until they pulled over another car, which was exactly the same model as ours. They were clearly looking for someone with the same car as the one we rented. Luckily, the police officers realised quite fast that we weren’t the people they were looking for. As you can see, today was quite an eventful day!

Tomorrow should be less eventful, as our only plan is to take the bus to Tulum where we will stay about 5 days.