5 of the most beautiful sandy beaches in Malta 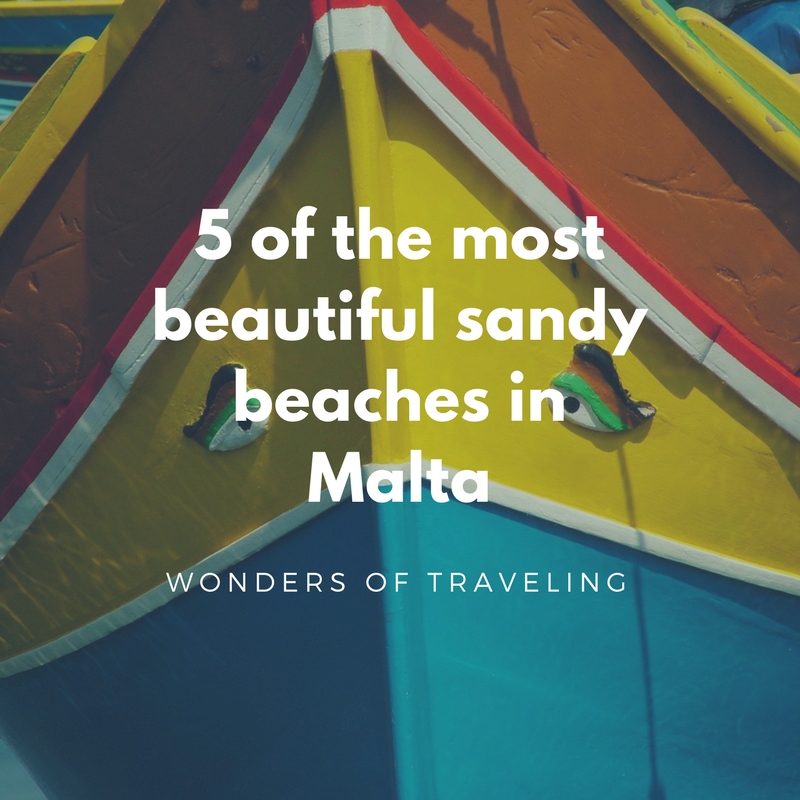 If you’re a bit like me, you imagined Malta to be a tropical paradise with pearly white beaches and wavy palm trees. To be fair, the landscape I was imagining was more like the Seychelles or Mauritius, which not really what Malta looks like. I didn’t expect that most of the beaches in Malta are rocky beaches. However, don’t despair if you don’t particularly like lying down on hard rocks when you’re sunbathing. There are a couple of very beautiful sandy beaches in Malta which I would like to introduce to you!

Malta might not have many of those pearly white beaches I was talking about, but you can, however, sunbathe on a beautiful red beach! If you want to admire this red sand, you have to visit Malta’s sister island Gozo. Ramla Beach is located in the town of Nadur, on the north-western part of Gozo.

To get there from Malta, you have to take a bus or taxi to Cirkewwa where you can take the ferry which will take you to Gozo in only 20 minutes. Once you’ve arrived in Gozo you can either take a bus or a taxi to reach Ramla Bay.

From Ramla Bay you can hike up one of the surrounding hills to reach the Tal-Mixta Cave. This cave gives you an incredible view all over Ramla bay.

If you want to relax on the biggest sandy beach of Malta, you have to head over to Mellieha Bay. Here you will find an 800 meter long stretch of sand with beautiful views. At Mellieha Bay you will find all possible amenities, there are a couple of restaurants on the beach and plenty of opportunities to try out different water sports (water skiing, wind surfing, banana rides, etc.).

This beach is perfect for families since the water is shallow and Mellieha bay is easily accessible. Lots of buses on their way to the north of the island stop here. From Sliema you can take the 222, from Valletta the 42 or X1, from Bugibba the 221 and the 222.

As someone who’s been living in Malta for 3 years, I know very well how crowded Malta can get. Especially during summer. Most tourists head over to Golden Bay, one of the biggest sandy beaches in Malta. If you don’t mind the tourists, Golden Bay is a very beautiful swimming spot. But next to Golden Bay you have a smaller sandy beach which usually is a bit less crowded. Ghajn Tuffieha is a beautiful beach with amazing surroundings. You can walk from Ghajn Tuffieha to its neighbouring beach Gnejna Beach, but don’t be surprised if you suddenly bump into naked people since part of Ghajn Tuffieha is reserved for naturists.

You can reach Ghajn Tuffieha from Sliema by taking bus 225. However, chances are very big the bus will be completely full. So be prepared to leave early or take a taxi instead.

San Blas beach, also located on Gozo, is one of my personal favourites. During summer you can even camp next to the beach, it looks so romantic! Just like Ramla Beach, the sand at San Blas also has this beautiful red colour.

One of the things I particularly liked about San Blas is that it’s closed off to traffic. To reach it, you have to walk down a very, very steep road which leads to the beach. There’s also the option of taking a jeep which drives up and down the hill for only €1. Because of this steep hill, San Blas is still relatively quiet and unknown, which makes it an even better spot for some sunbathing and swimming! When I was there, I had to pinch myself in the arm several times; I could barely believe I live in such a beautiful spot.

As I mentioned earlier, Golden Bay is the most popular sandy beach in Malta. It’s easily accessible with the bus (same bus as the one that goes to Ghajn Tuffieha), has quite a lot of parking space in case you decide to go there by car, and has a couple of restaurants and food trucks (don’t expect anything super tasty). Since it is so popular, I wouldn’t advise going there during peak summer. You will be fighting for a a small stretch of sand. Golden Bay is a better shout if you’re travelling to Malta during Spring or Autumn. During those times, when the beach isn’t as touristy, you can really enjoy the beauty of Golden Bay!

Have you ever been to Malta? Which one of the beaches was your favourite? Please feel free to leave a comment!